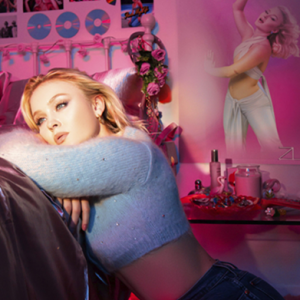 (January 15, 2021 – Los Angeles, CA) – Today, multi-platinum pop star Zara Larsson has made her highly anticipated, forthcoming album, Poster Girl, available for fans to pre-order and pre-save across digital streaming platforms. The album is slated to be released on March 5th via TEN/Epic Records.

Listen to the track HERE via TEN/Epic Records. Watch the music video HERE.

Zara Larsson has all the makings of a classic pop star, but in the most contemporary form. Her unshakeable enthusiasm for music saw Larsson land her first number 1 single aged 15, but also feels deeply rooted in the national psyche of Sweden. Zara’s sixth sense for pop melodies have powered a series of chart-bulldozing anthems ever since (including ‘Lush Life’, ‘I Would Like’, ‘Symphony’, ‘Never Forget You’, and ‘Ruin My Life’). Zara Larsson’s ambition, though, only starts with the bangers. Few mainstream acts can claim to have performed before the Nobel Prize committee, won an award for feminism from Sweden’s oldest women’s’ rights organization, and led a Durex campaign in association with the HIV charity Red in the same breath as having toured stadiums with Ed Sheeran, or worked with BTS, Ty Dolla $ign and Mura Masa. A budding Gen Z role model, Zara is as fluent in the magic of pop music as she’s likely to speak without filter on love, sex, and online life.

About Zara Larsson
All women have superpowers. Wielding those superpowers, Zara Larsson provokes and pushes pop music and culture forward with empowered, enlightened and energized anthems that soar and seduce all at once. With every move, she continues to quietly make history and break records. Her platinum-certified 2017 full-length, So Good, notably stands out as “the second-most-streamed debut on Spotify by a female artist ever,” eclipsing 5.5 billion streams worldwide. Her growing catalog boasts one smash after another, including the quadruple-platinum “Never Forget You” with MNEK, the 3x platinum “Lush Life” and platinum “Ain’t My Fault,” and, most recently, 2019’s platinum “Ruin My Life.” Out of dozens of nominations, she has received various awards and honors at the Swedish Grammy Awards, Nickelodeon Kids’ Choice Awards, MTV EMAs, and more. Gracing the stage of the 2017 Nobel Prize Peace Concert, she performed the platinum “Symphony” with collaborators Clean Bandit. Emerging from lockdown in 2020 with a fierce, focused, and feminine fire, Zara arrives with a bold and boundary breaking body of work for her forthcoming international album.