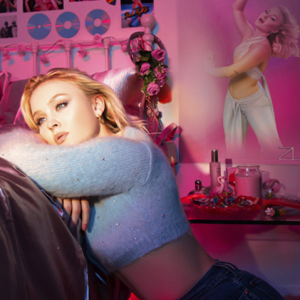 Get it HERE via TEN/Epic Records.

“I love this song so much. I wanted to write about heartbreak, but in a way that was also empowering and positive. In my world being vulnerable is being strong, but on this one I’m saying ‘just LOOK at what you’ve done – I’m shining! You look like a piece of shit! It was important for me to have a song like this on Poster Girl,” says Zara.

Last week, Zara announced she’ll be hosting an exclusive online concert to commemorate International Women’s Day (March 8th), where she will be performing songs from Poster Girl alongside some of her biggest hits. The livestream will air exclusively on Zara’s Youtube for a limited time courtesy of iconic Swedish business Ikea and presented by Live Nation (subscribe now for more information to follow).

No mere ‘Poster Girl’, Zara Larsson is that new kind of pop star. At just 23-years-old, the Stockholm-based sensation has showcased her sixth sense for hit melodies with a series of chart anthems (“Lush Life”, “Never Forget You,” ”I Would Like,” “Symphony” and “Ruin My Life” to name but a few). Her first international album, So Good, became the second most-streamed debut by a female artist ever on Spotify. Its followup, Poster Girl, marks without a doubt her arrival at Pop’s Top Table. Mixing some of the musical loves of her life (the dance floor melodrama of local heroes Abba, the empowered R&B of early Rihanna) with themes of female empowerment, fame, and finding yourself, Zara has worked on the record alongside a formidable list of collaborators: from Young Thug (on new single “Talk About Love”) and Max Martin to Julia Michaels and Justin Tranter (Selena Gomez, Dua Lipa, Justin Bieber), Steve Mac (Ed Sheeran, Years & Years) and Camille Purcell (Little Mix, Mabel).

All women have superpowers. Wielding those superpowers, Zara Larsson provokes and pushes pop music and culture forward with empowered, enlightened and energized anthems that soar and seduce all at once. With every move, she continues to quietly make history and break records. Her platinum-certified 2017 full-length, So Good, notably stands out as “the second-most-streamed debut on Spotify by a female artist ever,” eclipsing 5.5 billion streams. Her growing catalog boasts one smash after another, including the quadruple-platinum “Never Forget You” with MNEK, the 3x platinum “Lush Life” and platinum “Ain’t My Fault,” and, most recently, 2019’s platinum “Ruin My Life.” Out of dozens of nominations, she has received various awards and honors at the Swedish Grammy Awards, Nickelodeon Kids’ Choice Awards, MTV EMAs, and more. Gracing the stage of the 2017 Nobel Prize Peace Concert, she performed the platinum “Symphony” with collaborators Clean Bandit. Emerging from lockdown in 2020 with a fierce, focused, and feminine fire, Zara arrives with a bold and boundary breaking body of work for her forthcoming international album.