YOUTUBE ORIGINALS TO PREMIERE NEW DOCUMENTARY “HOW TO BE: MARK RONSON” ON OCTOBER 12 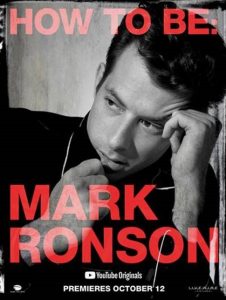 Features Never-Before-Seen Footage, The Untold Story of Ronson’s Rise to Fame and Exclusive Interviews with Celebrated Collaborators including

View the Official Trailer for “How to Be: Mark Ronson” Here

Los Angeles, CA [October 8, 2019] – YouTube Originals today revealed it is partnering with one of the world’s most notable music producers, Academy, Grammy and Golden Globe-winning artist, Mark Ronson, on “How to Be: Mark Ronson,” set to premiere Saturday, October 12.

Mark Ronson redefined popular music – from his Grammy Award-winning collaborations with Amy Winehouse and Bruno Mars, to his recent work on the Oscar-winning film A Star Is Born –  making him undoubtedly one of the biggest music producers in the world. “How to Be: Mark Ronson” follows Mark’s

creative process with exclusive insights from the man himself, including reflection about his childhood, his early days in the music industry, working with Amy Winehouse, the eight-month process to create his most successful hit to date, “Uptown Funk,” and what it is really like working with the world’s most influential artists. This is combined with never-before-seen archival footage and exclusive new interviews with Ronson’s friends, family and most celebrated collaborators, including Ann Dexter Jones, Boy George, Bradley Cooper, Charlotte Ronson, Ilsey Juber, Joshua Homme, King Princess, Lady Gaga, Lykke Li, Mick Jones, Miley Cyrus, Nikka Costa, Q-Tip, Rashida Jones, Sean Lennon, Simon Le Bon, YEBBA and Zane Lowe.

As part of YouTube’s previously announced new programming strategy, for the first time, YouTube’s audience of 2 billion logged-in monthly users will have the opportunity to enjoy new YouTube Original series and specials released after September 24, 2019 for free with ads. YouTube’s subscription service, YouTube Premium, will continue to offer ad-free access to all YouTube Originals with all episodes available to them at once to binge. Additionally, YouTube Premium subscribers will have exclusive access to director’s cuts and bonus content of YouTube Originals (including “How to Be: Mark Ronson”) when available. The news follows record growth for YouTube Originals, with total views of the full slate growing more than 40% compared to last year.

ABOUT “HOW TO BE: MARK RONSON”:

Mark Ronson is undoubtedly one of the biggest music producers in the world.  The phenomenal success of ‘Shallow’ and A Star is Born with Lady Gaga, and the awards that have followed including a Grammy, a Golden Globe and now an Oscar have cemented Mark’s status as a global hitmaker. His biggest hit to date is of course ‘Uptown Funk’ which is the no. 5 most watched YouTube clip with 3.5bn views and has sold over 11 million singles!  He won Record of the Year and Producer of the Year at the Grammys following its success and has won a total of 30 awards to date, including amongst others, seven Grammy awards, two Brits, a Golden Globe and that Oscar for ‘Shallow’.

Mark has produced a huge and impressive list of talent including Lady Gaga, Queens of the Stone Age, Q-Tip, Duran Duran, Miley Cyrus, Lily Allen, and Amy Winehouse. Back to Black is the seminal album from the supremely talented Amy Winehouse which saw her break out as an original and unique star and Mark as a hugely talented and original producer.

The 43-year-old British producer is hailed as this generation’s megastar producer and compared to Phil Spector, Quincy Jones and George Martin. When people talk about him, they talk about his mix of style and substance. That he is a most definitely a respected and respectful producer who appreciates talent and enhances that extremely cleverly.

Mark talks us through how he came to music.  Growing up in a musical family, his step-dad being Mick Jones of Foreigner. A life that started in London and then moving to New York where a love of hip-hop started. Mark DJ’d at the start of his career and continues to do so to this day. We find out about his musical influences, we talk to his family and close friends about how they watched Mark’s love of music grow and develop and why they think he has had such huge success.

We ask him about his early days as a producer, the projects that didn’t work, that it absolutely wasn’t a quick rise to fame, the near misses and how he picked himself up afterwards and carried on and the start of gaining more work as a producer which led to him working with Amy Winehouse.  Mark talks about Amy and shares footage of their time together.

Contributors who are musicians talk about ‘his ear’, and how he reads people and situations without trying to change them as artists.   We will get the answer to the question as to why he is so in demand and why exactly artists love to work with him so much. Mark talks about “Uptown Funk,” the inspiration and how it took eight months to complete. He talks about having ‘Imposter Syndrome’ in its aftermath and how he really feels working with some of the biggest artist in the world.

We hear from Bradley Cooper on working with Mark on A Star is Born and with Lady Gaga who talks candidly about her evolving relationship with Mark from producing the incredible album, Joanne through to “Shallow.”  Bringing the film up to the present day, we unpack the creative process behind Mark’s most recent album, Late Night Feelings. We follow and hear from several of the album’s featured artists – YEBBA, Ilsey and Lykke Li.