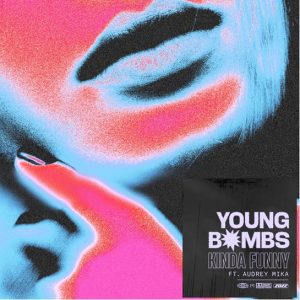 LA-based, Vancouver-born duo Young Bombs team up with YouTube sensation Audrey Mika for infectious summer anthem, ‘Kinda Funny’. The latest pop-doused offering arrives on the heels of their recent single with Stondon Massey, ‘U Up?’ and the Gold certification of their previous track ‘Better Day’ featuring Aloe Blacc. The catchy chorus and stellar production technique come together to make the track a definite addition to the soundtrack of any summer party. ‘Kinda Funny’ is due for release across all streaming platforms on July 29 via Sony Music Canada.

‘Kinda Funny’ blends deep house sounds with elements of modern pop and oozes with an uncontrollable groove. Kicking off with a mesmerizing vocal cut paired alongside a catchy rhythm and thumping bassline, the tune cascades into a captivating production. Taking the focal point, Audrey Mika’s airy vocals are the perfect pairing for the high-octane production. Young Bombs teamed up with songwriters Deza (Elio, Zara Larsson, MOTi) and Rollo (Dixie, Charli XCX, Noah Cyrus) for lyrical duty, who perfectly capture the emotional complexities of moving on from someone. From start-to-finish, their latest collaborative party anthem serves as an energetic rollercoaster that is sure to have dancefloors grooving this summer. 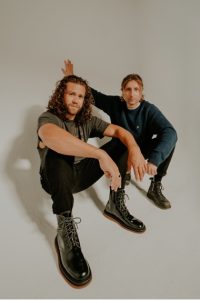 Canadian DJ duo, Young Bombs, now JUNO nominated, Gold certified artists with 159+ million global streams, are getting set to light it up in 2022, with brand new music including their latest offering with ‘Kinda Funny’ featuring Audrey Mika. With a singular approach to writing songs that stand alone as thoughtful compositions you can always count on the pair to provide that effervescent spirit to fans. Basically, get ready to party because the time for being sad is over and Young Bombs are ready to bring the party. Bringing their career to new heights, they have lent their talents to everyone from Nick Jonas, Selena Gomez, and Lady Gaga to Billie Eilish, Post Malone, Khalid, and Bazzi. Additionally, their highly successful hits have garnered attention from the likes of Tiesto, Oliver Heldens, and Don Diablo. Simultaneously, they have graced the stages of blockbuster festivals such as Lollapalooza, Firefly Music Festival, and The Billboard Hot 100 Festival. Not to mention having supported The Chainsmokers, Galantis, R3hab, and Adventure Club on tour around the globe and even secured a coveted residency at Drai’s Beachclub in Las Vegas.

AUDREY MIKA is an artist and songwriter hailing from the Bay Area (CA). She first rose to prominence as a YouTube sensation, posting covers to her YouTube channel (now with 1.5M subscribers) and releasing two full EPs independently: 2018’s Are We There Yet and 2019’s Level Up, which she recorded entirely on GarageBand. This launched her into signing a major label record deal with RCA and releasing her Summer 2019 single “Y U Gotta Be Like That.” Her subsequent releases include her debut EP on RCA Records 5 A.M., and a slew of singles including “Just Friends”, her collaboration with SAYGRACE & Tate McRae “Boys Ain’t Shit (feat. Tate McRae & Audrey Mika)”, Gryffin’s “Safe With Me (with Audrey Mika)”, and most recently her collaboration with the Deux Twins, “Madonna”. She’s been called a “rising star” by PAPER, declared “a beacon of Generation Z brightness” by Ladygunn, “…one of the breakout stars of 2020” by Idolator, “more than meets the eye, she is a true visionary with a dedication to her dope desires” by Flaunt Magazine, and her original music has been praised by Ones To Watch who called it “incredible.” Additionally, “Just Friends” was met with Billboard praising her “top-notch vocals”, and E! News declared it an “irrepressibly catchy track”. Audrey is wrapping her debut album now – in the meantime she’s collaborating with other artists.