Western Stars – Songs From The Film 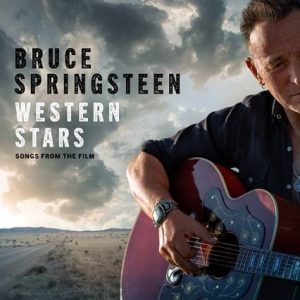 (New York, NY): Columbia Records will release ‘Western Stars – Songs From The Film’ on October 25th, featuring each of the live performances captured in Bruce Springsteen’s directorial debut ‘Western Stars.’ The soundtrack includes every song from Springsteen’s most recent studio album of the same name, as well as a cover of Glen Campbell’s “Rhinestone Cowboy.”

‘Western Stars – Songs From The Film’ pulls the audio from the film co-directed by Bruce Springsteen and longtime collaborator Thom Zimny. Springsteen and Ron Aniello produced the soundtrack, and its audio was mixed by Bob Clearmountain and mastered by Bob Ludwig, the same legendary duo behind ‘Springsteen on Broadway.’

The ‘Western Stars’ film is a cinematic retelling of Springsteen’s first studio album in five years, as he plays the album backed by a band and full orchestra at Stone Hill Farm in Colts Neck, NJ. The film premiered at the 209 Toronto International Film Festival and is written and performed by Bruce Springsteen, with special guest Patti Scialfa. Zimny, Jon Landau, Barbara Carr, and George Travis produced the film, with Springsteen serving as executive producer. The original score is by Springsteen.

The ‘Western Stars’ album has become a global success by nearly every measure, reaching #1 on charts in every continent on earth and hailed by critics as some of the finest music of his career. The album also placed Springsteen alongside David Bowie and the Rolling Stones one of the Top 5 acts with the most #1 UK albums.

All songs written by Bruce Springsteen, except “Rhinestone Cowboy”

“His best new work in a decade…some of the most charming material of the venerable star’s career.” – Esquire

“Songs that thrive on the swells and undulations of orchestral drama…its gathering impact comes from its expansive arrangement, which opens and deepens around his voice like an endless prairie.” – New York Times

“It stands comparison with his very best solo albums” – The Telegraph

“Springsteen’s long-distance road trip to bold new sonic horizons, steeped in tradition but strikingly distinct all the same” – The Sun

“Majestic in its scale, but traditional in its subject matter and narratives, ‘Western Stars’ is a wonderful thing” – NME