SONGS FROM THE MUSICAL JEANNETTE 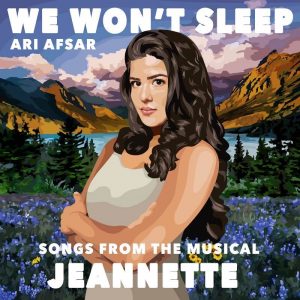 About the release, Afsar commented, “I’m not sure how we do it, but we gotta choose love for a better democracy. This album is a manifestation of all my hopes, dreams, and goals for a better America. One full of acceptance, equitable representation and joy. I may not know the entire route to get there, but I do know the first step is voting and it takes every single one of us.”

Introducing the album earlier this month, Afsar shared the lead single “Who Are You” [feat. MILCK & Genesis Be]. Uniting three powerful female voices on one timely anthem, the song encapsulates the emotion, intensity, and passion of both Jeannette Rankin’s fight and our own – listen here. Check out the full tracklisting below.

The vision of America’s most produced playwright Lauren M. Gunderson and Afsar, Jeannette brings the true life story of suffrage activist, social worker, and proud Montanan Jeannette Rankin to life like never before. It shines a new light on her journey, beginning with her 1916 election to Congress—three years before women were granted the right to vote. She notably stood out as the only female voice to vote on women’s suffrage in the midst of a global pandemic and on the eve of the 1920 election. Does this setting sound familiar?

Jeannette Rankin fought for equality with everything she had, and this musical breaks enough boundaries to make her proud. Jeannette was cast with intentional and encompassing diversity that includes white, Black, brown, Asian, Indigenous, gay, straight and Trans performers. It emerged as “one of three musicals selected from 400-plus applications” for the 2019 Eugene O’Neill Theater Center’s National Music Theater Conference. At the 2020 installment of Broadway Across America’s annual conference, Jeannette distinguished itself as “the only original musical not based on a book or movie” and “the only show written by a BIPOC composer and lyricist.” The team has collaborated with organizations, including the ACLU, Female Quotient and The Center for Popular Democracy. Additionally, its 20-minute live virtual performance graced online fundraisers for progressive candidates such as Tammy Duckworth and Cori Bush.

Now, We Won’t Sleep allows listeners everywhere to experience the incredible history of Jeannette Rankin amplified in song by the raw, real, and relevant voice of Ari Afsar.

WE WON’T SLEEP SONGS FROM THE MUSICAL JEANNETTE

A graduate of Ethnomusicology Jazz at UCLA, Ari Afsar released her debut EP “Somewhere I Thought I’d Be” in 2019. She was the original Eliza Hamilton in Chicago’s production of Hamilton in 2018, a Top 36 American Idol alum, Top 10 at Miss America 2011, Miss California 2010, and currently stars in a SXSW-award winning series. She opened for Michelle Obama at the United State of Women at the Shrine Auditorium, performed at the U.S. Institute of Peace, and opened for the ACLU national conference in D.C. Afsar has placements on ABC, Disney, and an On-Demand feature. She has been an advocate/performer/and public speaker for The Women’s March, The Social Innovation Summit, Nexus Global, The University of Chicago, and the MoveOn rally on the steps of the U.S. Supreme Court.