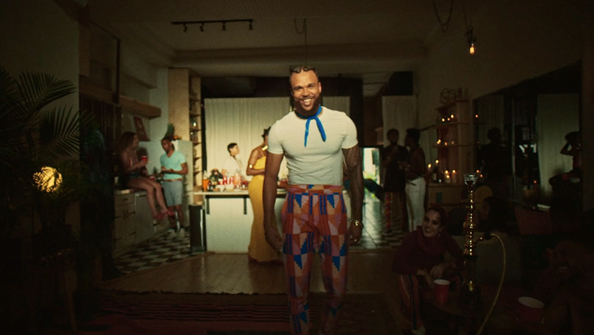 ANNOUNCES 85 TO AFRICA TOUR THIS FALL

In the visual, Jidenna allows viewers to witness what typically happens at a gathering with his tribe, a vibe that feels like Stankonia meets Fela’s Shrine in Brooklyn. Shot during an intimate home soiree, he opens the door and welcomes the camera into a gathering of friends eating, drinking, smoking, and being merry. The action builds towards a climax of dancing as our host breaks it down with inimitable swagger, spirit, and style. Intercutting a long fluid tracking shot, the pacing mirrors the song’s jump from nimble verses into a chantable hook.

“Tribe” paves the way for his highly anticipated second full-length, 85 To Africa, coming on August 23, 2019.

Just last week, he surprised fans everywhere and the industry at large by dropping “Tribe” and “Sufi Woman.” Right from the jump, they garnered critical acclaim. Consequence of Sound called “Sufi Woman” a “hip swinger that applies trap drum programming and Auto-Tune accents to decades-old global sounds,” and dubbed “Tribe” a “more distinctly modern slow groove.” Touted among “The 9 Songs You Need To Hear This Week,” OkayAfrica claimed, “he’s brought his A-game. Jidenna gives us a brilliant sneak preview with his two new singles.”

This fall, he brings the new album to life on the 85 To Africa across North America. It kicks off October 2 in Sacramento, CA, plays major markets coast to coast, and closes out on November 16 in Los Angeles, CA. Check out the full itinerary below.

Buckle up for more from 85 To Africa soon!

The project marks the culmination of an unbelievable journey for Jidenna. Following the runaway success of his 2017 debut, The Chief, he was evicted from a rental home after the owner foreclosed without notifying him. He was scheduled to immediately begin a tour that began on the I-85 in Atlanta and ended in Johannesburg. Without a home to return to, he wound up living in cities across Africa and created this masterful soundtrack for a road trip across the Atlantic Ocean. This life-changing shift laid the groundwork for 85 TO AFRICA and what promises to be one of the most dynamic, diverse, and definitive projects of 2019.

As a prelude to this journey, also shared an album trailer. In the visual, Jidenna chronicles the events leading up to his move in honest detail before giving a snapshot of what to expect on the album and this incredible journey.

Take a ride on 85 TO AFRICA with Jidenna, and you may never be the same…

Hip-hop needed a global voice, but it got a global leader in Jidenna. He rose to the forefront of the conversation with the double-platinum smash “Classic Man” [feat. Roman GianArthur], which garnered a GRAMMY® Award nomination for “Best Rap/Sung Collaboration.” Kendrick Lamar hopped on the remix, and a chopped-and-screwed version appeared in the Academy® Award-winning Moonlight. Meanwhile, his debut The Chief received widespread acclaim from The New York Times, XXL, The Guardian, and more. Extending his influence, he graced the screen everywhere from NETFLIX’s Luke Cage and The Daily Show with Trevor Noah to Insecure.