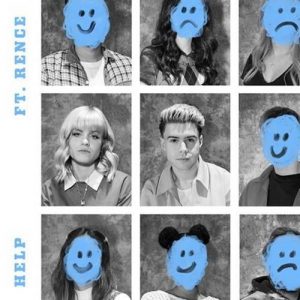 Of the new song, Sarah says: “This song is about reminding yourself that it’s okay not to be okay and it’s okay to ask for help. It’s about learning that sharing your struggles does not make you weak.”

The second I heard Rence’s verse on this song, I knew it was going to be a special one. The vulnerability in his words, story and voice really brought the message to life, of two people reaching out and sharing their own struggles with one another.”

Rence says: “This song feels so important to me because it works to fight the stigma that exists around not being okay, and not being acceptable to ask for “Help” when you need it. I am always amazed by artists that can effectively use their art and platform to enact change – and always try to find ways to do that with mine – so joining Sarah on the record felt like the perfect fit. I wrote my verse of this song – about my tendency to always try and seem strong, especially in my most broken moments – to give the world another example of how someone would have benefited from asking for help. The two of us come together on the second hook admitting that sometimes, we both just need a helping hand.”

Sarah Barrios continues to pull on our heartstrings. In just six months, she has amassed over six million streams worldwide. Sarah released her previous single, “Somebody I’m Proud Of” last month via Visionary Records/Arista Records. The track was accompanied by an effervescent music video which can be viewed HERE. Earmilk said, “it’s a lush tune woven with dainty and silky lines that are simply cashmere to the ears, and ready for any Fall playlist.”

The new music arrives on the heels of her debut EP release Letters I Never Sent. In signature Sarah Barrios style, the lead single “Emotional” offered an unfiltered honesty that’s impossible not to connect with. Watch the official video HERE.  The EP was critically praised by Clash Magazine and The Line of Best Fit, who aptly described her music as “dream pop.” Notion Magazine proclaimed Sarah as “raw and vulnerable.”

Growing up in Torrington, Connecticut, as part of a musical household, Barrios’ journey to becoming an artist shouldn’t be surprising, but like many young music lovers the idea of doing this as a job seems impossible, at first. Turning her talent from songwriting into hits for other artists paid off and now she’s living out her dream, doing it for herself.

ABOUT RENCE
Sharing real life snapshots in song, Rence magnifies his personal perspective through a genre-less palette, bordering pop, alternative, electro, indie and hip-hop all at once, yet never dipping into one for too long. He introduced himself on the breakthrough independent project, Pink, with its single “Baby Blue” racking up millions streams. Signing to Epic Records in 2019, his single “Expensive” featuring Noah Cyrus made waves and turned heads right out of the gate. He showed no signs of slowing down with his major label debut EP FALL 2019 and consistent output in 2020 with the bold and buzz-y “hate u, btw,” “Type 2,” “Tears in December,” “Sometimes Things Just Fall Apart” and most recently, “Strawberry Blonde.” During his rise, Rence has received a wave of critical acclaim from a diverse group of publications. Paper pointed out that he “has been on a steady climb” while Wonderland proclaimed him “one artist to keep an eye ono very closely in 2020.” Lyrical Lemonade proclaimed that  Rence is “one of the most promising vocalists in the music industry right now” while Flaunt Magazine may have put it best: “Rence is in his own lane… the singer, songwriter, and producer works super hard to make sure his music is free of rules, filling people’s lives and helping them create meaningful moments.” He’s been called one of Pigeons and Planes Best New Artists and received additional love from the likes of The FADER, Billboard, Nylon, i-D, V Man, TMRW, Euphoria, Zane Lowe  and more. Additionally, his discography has been streamed over 25 million times world-wide.