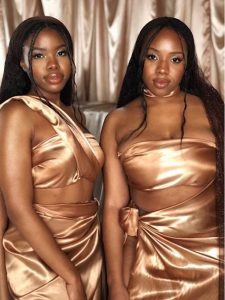 [New York, NY – March 19, 2019] Today, VanJess releases their new video for “Honeywheat” from their acclaimed Silk Canvas album, out now via Keep Cool Records.  The video features the sisters, Ivana and Jessica, as living works of art as their sultry voices paint the picture of the alluring song.

“‘Honeywheat’ is a sensual song that couldn’t have come at a more simple moment,” says Ivana. “A box of honeywheat pancake mix and some lustful thoughts gives the song its body, a feeling of wanting someone and finally being in their sweet space and presence.”

Speaking on the concept of the video, director Alexandra Gavillet states: “The sensuality and intimacy of ‘Honeywheat’ immediately made me think about what it means to be a Goddess, and how to own your Queendom in true VanJess fashion, and I thought it would be incredible to honor women in a moving painting concept, inspired by the early paintings in the Renaissance and Baroque era of art.

Fans can catch VanJess perform “Honeywheat” and more from the album Pitchfork describes as a “captivating fusion of 1990s R&B with contemporary electronic touches,” at the 2019 Essence Fest in New Orleans.