YOUNG BOMBS DROPS A NEW BANGER
“U UP?” FEAT. STONDON MASSEY
OUT NOW! 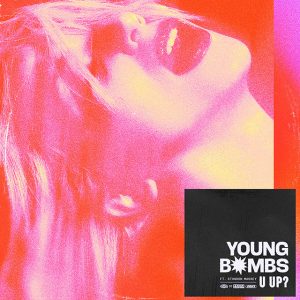 [Toronto, ON – November 26, 2021] Hot on the heels of their North American tour, Vancouver’s electronic DJ/Producer duo Young Bombs return with the release of their newest single “U UP?” featuring Stondon Massey. The track’s vibrant production delivers the energetic sound loved by Young Bombs’s fans. Listen now!

“U UP?” describes the intensity and excitement of pursuing a romance with a close friend. The lyrics are layered with electric beats and keyboard rhythms for an ecstatic build-up, and a drop guaranteed to make listeners dance.

Young Bombs member Martin recalls how the song came together. “’U UP?’ Is one of our favourite records that we’ve worked on up to this point. It pays tribute to our four-on-the-floor remix, so uplifting remixes and was something we instinctively just knew we had to put out into the world. Standon’s vocal performance is on another level and we can all relate to the cheeky lyrics, at one point or another.”

“Now we just gotta get started on our next record!” adds Tristan.

Stay tuned for more to come from Young Bombs!

In 2019, Young Bombs made the bold leap from sought-after remixers to artists. That leap remains driven by a personal and creative chemistry forged way back in the Vancouver high school where they became best friends. With nearly 100 million streams in four years, the duo has become one of the biggest artists in a short amount of time. In addition, they attracted the support of Tiësto, Oliver Heldens, and Don Diablo. Simultaneously, they graced the stages of blockbuster festivals such as Lollapalooza, Firefly Music Festival, and the Billboard Hot 100 Festival. Not to mention, Young Bombs supported The Chainsmokers, Galantis, R3hab, and Adventure Club on tour around the globe and launched a coveted residency at Drai’s Beachclub in Las Vegas.