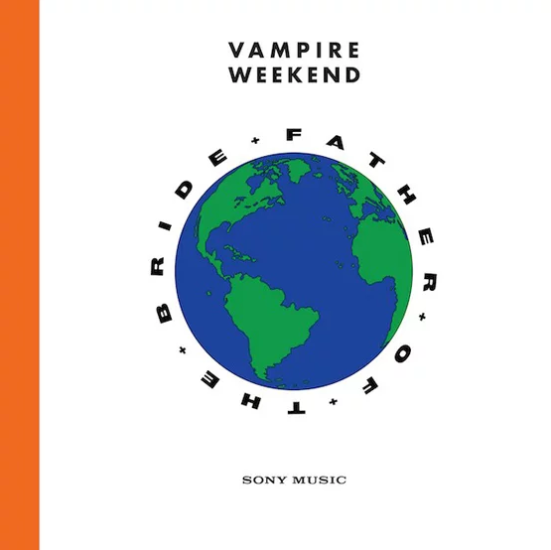 MAY 7th ON THE TONIGHT SHOW STARRING JIMMY FALLON

“The album proves that they’re still better than most, if not all, of the other artists of that era… More important, the band has a genius-level songwriter in Koenig”
—USA TODAY

“Quite possibly their magnum opus… One of rock’s most thoughtful songwriters has given us much to unpack. At 18 tracks, Father Of The Bride is both dense and sprawling, rich with ideas and Easter eggs and dazzling musical flourishes… not a second feels wasted.”
—STEREOGUM

“Vampire Weekend Have Gone and Made Another Masterpiece”
—ESQUIRE U.K.

“An exceptional release… packed with exquisitely rendered miniatures that are immediately engaging but which, dense with layers and allusions, will almost certainly mean even more in the long run.”
—THE WALL STREET JOURNAL

“Perhaps the best band still standing from the mega-indie era, with a bigger and broader sound worthy of a longtime festival headliner.”
—THE RINGER

Ending months of fevered anticipation punctuated by three brilliant double-A-side singles and a slew of over-the-top positive early reviews, Vampire Weekend’s long-awaited fourth album Father of the Bride is released today, May 3rd, on Columbia Records. Get Father of the Bride here: http://smarturl.it/VampireWeekend_FotB

Vampire Weekend will celebrate FOTB’s release with an all-day show Sunday, May 5th at New York City’s recently reopened Webster Hall. Over the course of the morning and afternoon, the band will play three sets including a performance of the new album in its entirety. Bagels for breakfast and pizza for lunch will be included. See http://vampireweekend.shop.ticketstoday.com for more information.

Simultaneous to the May 5th all-day affair will be a very special episode of Time Crisis with Ezra Koenig. This installment of the internet radio show created and hosted by Ezra will feature an in-depth dissection of FOTB with the album’s co-producer Ariel Rechtshaid and de facto Time Crisis co-host Jake Longstreth.

And on Tuesday, May 7th, Vampire Weekend will make its first television appearance in five years, with a debut performance on The Tonight Show Starring Jimmy Fallon.

The May 5th all-day experience concludes Vampire Weekend’s New York State Tour of intimate venues, which brought an “unforgettable… truly transcendent experience” (Buffalo News) to Buffalo and Kingston. The Father of the Bride North American Tour begins the weekend of May 16-19 with a headlining set at the Hangout Festival in Gulf Shores, Alabama. The band’s U.S. dates currently extend through an October 8-9 two-night stand at Red Rocks in Colorado, and include Vampire Weekend’s most ambitious hometown date ever: a September 6th in-the-round performance for 18,000 fans at New York’s Madison Square Garden.