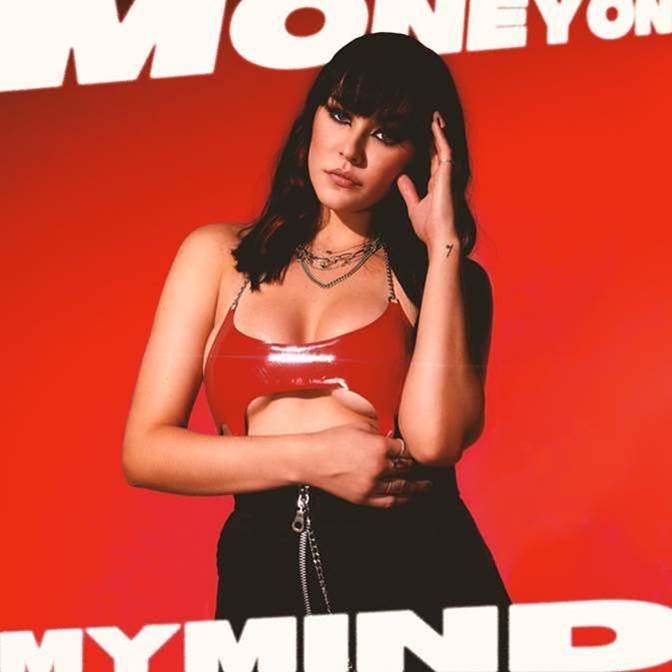 Regarding the song, she commented, “‘MoneyOnMyMind’ has nothing to do with actual money; it’s a mindset. You can have all the money in the world and still be completely miserable, but to FEEL money as fuck, that’s a whole other vibe. It’s all about the glow up. After every weak moment, there’s always a bounce back, and this song captures that feeling of getting on some new shit and hustling for the life you want.”

Produced by Absofacto, “MoneyOnMyMind” injects airy sonic flourishes into swelling bass, distorted 808s, and an undercurrent of guitar punctuated by a “cha-ching” or two. UPSAHL’s breathy delivery coils around the verses as she confesses, “I want the kind of love dollars can’t buy, but till the day comes, I’ll use them to pass the time,” before urging “show me the money.”

In addition, she also shares the Fight Club-inspired music video for “MoneyOnMyMind” today. The gritty visual intercuts vignettes of cash in a dryer with tight closeups and a spellbinding performance by UPSAHL.

She paved the way for Young Life Crisis with the single “People I Don’t Like”. To date, the track and music video have garnered over 3 million streams and counting. Plus, she unveiled an acoustic “Stripped” version here. Prior, she dropped off the standalone “12345SEX” , posting up close to 10 millions streams. See full EP tracklisting below.

Expanding her influence, she recently co-wrote “Good in Bed” for Dua Lipa’s chart-topping blockbuster, Future Nostalgia, and is currently lending her pen to Madison Beer, Anne-Marie, and many more.

Early in her career, UPSAHL released songs which gained much-deserved recognition throughout the Phoenix music scene. As a graduate of the Arizona School for the Arts, a performing arts middle/high school, UPSAHL continued to hone her craft, while being trained on piano, guitar and choir every day. UPSAHL went on to ignite a groundswell of fan adoration and tastemaker praise by way of numerous indie alternative gems.

“Can You Hear Me Now” achieved a palpable viral buzz followed by the widely praised single “Drugs”, which was featured on her debut Hindsight 20/20 EP and has been used in over 200,000 TikTok videos. “Drugs” led to a momentous year for the “up-and-coming indie-pop queen”—according to Alternative Press. 2019 saw UPSAHL take the stage at Lollapalooza and support acts including PVRIS, Joywave, BROODS, Max Frost, and Young the Giant. Additionally, “Smile For The Camera” hit Top 40 on Alternative Radio as it attracted glowing critical acclaim and YouTube claimed UPSAHL as their ‘Artist on the Rise’. Nylon proclaimed, “She’s on her rock star ish,” and American Songwriter labeled the track, “intelligently written.”

Her enigmatic, endearing, and entrancing style garnered widespread critical acclaim from Nylon, V Magazine, PAPER, Billboard, Refinery29, Ones To Watch, Consequence of Sound, The Line of Best Fit, Alternative Press and more. Signing to Arista, her rise to pop ubiquity (on her own terms) has only just begun.