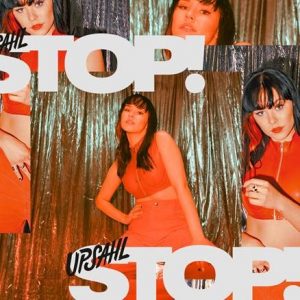 “UPSAHL is kicking ass and taking names…bold and brash, she holds nothing back”

“Expressing an unmatched vulnerability in each of her tracks, UPSAHL exudes an infectious sense of confidence that provides an aura of empowerment for her listeners, one so strong that pressing replay becomes increasingly irresistible”
— V MAGAZINE

“UPSAHL’s music serves as higher education for all of us. It’s full of hooks that dare you to take the chance…they are young, voracious pop bops that don’t follow the typical formula”
— LADYGUNN

“Talented TikToker you need to know”

(February 12, 2021 – New York, NY) – Following closely on the heels of a whirlwind 2020 that saw her skyrocket past 100 million streams, critically-acclaimed trailblazer UPSAHL has now released her latest earworm anthem, “STOP!”, out today via Arista Records.

“STOP!” follows the release of UPSAHL’s intoxicating remix of her fan-favorite viral hit “Drugs”, featuring globally-renowned singer/songwriter/producer blackbear. A feel-good repudiation of clout-chasing culture, “Drugs” has catapulted UPSAHL’s influence on TikTok, with nearly 2,000,000 videos made using the track. Reaching #6 on the TikTok Viral Chart and #1 Sound on the TikTok Trends chart, “Drugs” was featured in clips posted by the likes of James Charles, Charly Jordan, Alex French, Jason Derulo, and more. As “Drugs” continues to make waves, “People I Don’t Like” is now featured in Apple TV+’s promotional ad for the new season of “Dickinson”.

2020 was a standout year for UPSAHL, releasing her second EP Young Life Crisis, which Billboard crowned as one of the top 25 pop albums of 2020. Following the release, SPIN proclaimed that “UPSAHL is joining the ranks of kickass women in music”, and Billboard heralded the young star as “One to Watch”. UPSAHL also recently lent her pen to Madison Beer on her fiery single “BOYSHIT”, which 1883 praised as “a bop we can’t get out of our heads”. Earlier in 2020, UPSAHL undertook her first co-write on “Good in Bed” for Dua Lipa’s Grammy-nominated chart-topping blockbuster, Future Nostalgia, and has continued to write for heavy-hitting artists, such as Anne-Marie.

About UPSAHL:
Early in her career, UPSAHL released songs which gained much-deserved recognition throughout the Phoenix music scene. As a graduate of the Arizona School for the Arts, a performing arts middle/high school, UPSAHL continued to hone her craft, while being trained on piano, guitar and choir every day. UPSAHL went on to ignite a groundswell of fan adoration and tastemaker praise by way of numerous indie alternative gems.

“Can You Hear Me Now” achieved a palpable viral buzz followed by the widely praised single “Drugs”, which was featured on her debut Hindsight 20/20 EP and has been used in nearly 2,000,000 TikTok videos, reaching #6 on the TikTok Viral Chart and #1 Sound on the TikTok Trends Chart. “Drugs” led to a momentous year for the “up-and-coming indie-pop queen”—according to Alternative Press. 2019 saw UPSAHL take the stage at Lollapalooza and support acts including PVRIS, Joywave, BROODS, Max Frost, and Young the Giant. Additionally, “Smile For The Camera” hit Top 40 on Alternative Radio as it attracted glowing critical acclaim and YouTube claimed UPSAHL as their ‘Artist on the Rise’. Nylon proclaimed, “She’s on her rock star ish,” and American Songwriter labeled the track, “intelligently written.”

Her enigmatic, endearing, and entrancing style garnered widespread critical acclaim from Nylon, V Magazine, PAPER, Billboard, SPIN, Refinery29, Consequence of Sound, Alternative Press and more. Signing to Arista, her rise to pop ubiquity (on her own terms) has only just begun.