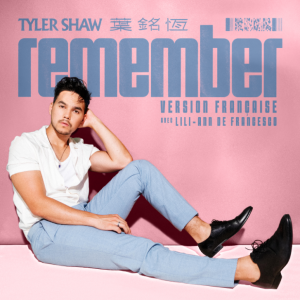 (Montréal, QC – October 19, 2020) – Last night, on the season finale of La Voix, Tyler Shaw premiered and performed a new French version of his latest single “Remember” with contestants from the show. The new version of the single, “Remember (version Française),” was released last night following the show, and is duet with pervious La Voix contestant, Lili-Ann de Francesco. Watch the episode here.

This is not the first time the actor, producer, and singer-songwriter has released a French version of one of his song; in April 2019 he released “With You” (Version Française) with Sara Diamond and it hoisted the track to the top of the Top Pop Adult Radio BDS in Quebec. The following summer, Tyler toured more than 21 Canadian cities, including a sold-out show in Montreal and participation in the Festival d’été de Québec.

At the start lockdown this year, Tyler spearheaded (with Fefe Dobson) ArtistsCAN, a collective artist initiative raising funds for COVID-19 relief in Canada. They gathered singers and musicians from across Canada including: Justin Bieber, Michael Bublé, Sarah McLachlan, Avril Lavigne and more, to cover  “Lean on Me” with all proceeds from the single going directly to the Canadian Red Cross. The performance was featured on the history making national TV special Stronger Together: Tous Ensemble -the most-watched non-sports Canadian broadcast on record with audiences reaching 11.5M viewers. The song has over 10M combined streams globally and racked up international attention in: Billboard, Rolling Stone, USA Today, People, Hits Daily Double, Stereogum and more.