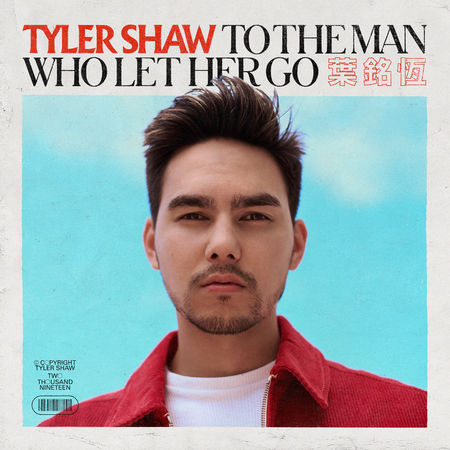 (Toronto, ON – August 12, 2019) Today, Canadian singer-songwriter Tyler Shaw debuts the music video for “To The Man Who Let Her Go” on his official YouTube page! At 5pm EDT, fans can join the chat with Tyler Shaw answering your questions followed by the official premiere at 6pm EDT! Click HERE to participate and watch the premiere.

Co-written with long-time collaborator and producer Alex Vujic, Phil Cook (Calum Scott, Lewis Capaldi) and Shaw, “To the Man Who Let Her Go” is a charming ode to Shaw’s wife’s past relationships. On this track, Shaw offers a more positive perspective on moving on from an ex. His heartwarming message is one of gratitude, both for his wife and toward her past boyfriends for letting her go. “It’s a different type of love song that reflects my appreciation for my wife and reflecting on how lucky I am to be with her,” he says. “Typically in a breakup, there are negative feelings after the fact, and I think in both of our respective past relationships we learned a lot and we’re lucky to have met each other.”

In the music video, directed by The Young Astronauts, Shaw performs in a train station as faceless people walk past him, the way people walk in and out of each other’s lives. “The men flying by in this busy train station represent exes – they float past and are just a moment of time in our story,” he explains.

The video release comes hot on the heels of Shaw’s performance at the Festival d’été de Québec. The FEQ draws in over one million attendees in Québec City’s historical district every year. Shaw also recently appeared in Ottawa, for Canada Day. The Chinese-Canadian singer celebrated Canada’s 152nd birthday in the nation’s capital with a performance at Major’s Hill Park.

His most recent single, “With You” was a staple on Canadian radio this past year, breaking the top 10 at 4 radio formats and is officially certified Platinum by Music Canada. The French version hit #1 on BDS Charts in Quebec, and peaked Top 10 at Canada Top 40, Hot AC and AC. The music video has amassed over 17.5 million views on YouTube. Watch it HERE.

Tyler Shaw is currently on the road with upcoming dates in Toronto, Oshawa, and London, ON and is set to release more upcoming tour dates for a headlining tour across Canada this fall.

Tyler Shaw is a Platinum-selling artist, producer and actor. He released his hit song “Kiss Goodnight” in 2012, and the melodic track quickly hit Platinum sales. In 2014 Tyler earned a JUNO Award nomination for ‘Breakthrough Artist of the Year’ and in 2019 earned a JUNO Award nomination for ‘Pop Album of the Year.’ He then went on to release certified Gold tracks “House of Cards” and “Wicked,” all from his 2015 debut album Yesterday. Shaw has opened for massive international artists including Shawn Mendes and Alessia Cara, as well as toured with Selena Gomez. Tyler’s first single “Cautious,” from his sophomore album INTUITION, was released in January 2018 and reached Top 10 at Canadian radio.