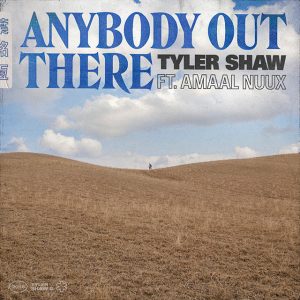 (Toronto, ON – May 4, 2018) – Today, Platinum-selling artist, Tyler Shaw releases his vulnerable ballad “Anybody Out There.” Shaw’s emotional track explores the intensely personal mental health themes of anxiety, loneliness and detachment. The song also features Toronto-based Somali-Canadian songstress Amaal Nuux. Her silky, soft vocals act as a call-and-answer to Shaw’s. Although the pair ask the same question, there is no answer–just an echo that reverberates. Watch the lyric video here.

This is an all too familiar feeling for Shaw: “I went from playing on sports teams, being in a big family, and surrounded by friends in Vancouver, to moving to Toronto by myself and being completely alone,” said Shaw. “Life in general can feel so detached, and I think in this current world, that’s a feeling we all can understand. The power of music is that it allows me to join the conversation and tell people that there is somebody out there, asking that same question you are, suffering the same sadness or anxiety, and we should talk about that together to help us through it. I wrote this song for that very reason.”

Amaal Nuux is a Somali-Canadian singer-songwriter who is based in Toronto.  Her music is noted for its socially conscious themes. She sings in a variety of genres, including pop and R&B. Nuux’s music has always focused on shared human experiences. She lends her voice to this track to explore a different but common type of human experience: isolation.

Tyler Shaw is a platinum-selling artist, producer and actor. The Chinese-Canadian released his hit song “Kiss Goodnight” in 2012, and the melodic track quickly hit Platinum sales. In 2014 Tyler earned a JUNO Award nomination for ‘Breakthrough Artist of the Year.’ He then went on to release certified Gold tracks “House of Cards” and “Wicked,” all from his 2015 debut album Yesterday. Tyler has opened for massive artists such as Shawn Mendes and Alessia Cara, as well as toured with Selena Gomez. The multi-talented artist recently exercised his acting skills as the lead role in the feature film The Meaning of Life, released in summer of 2017. Shaw’s sophomore album is set for release later this year.