TYLER SHAW RELEASES DANCY VISUALIZER FOR “SEX ON THE BEACH” 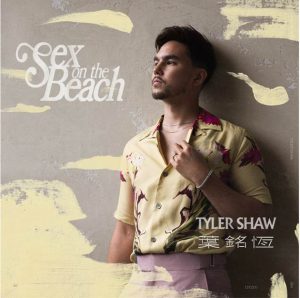 (Toronto, ON – July 14, 2021) Singer, songwriter, producer Tyler Shaw, releases today the official visualizer for his latest track, “Sex on the Beach.” Directed by Camm Hunter (Down With Webster) and Tyler, the fun and playful video features Tyler and an array of artists, talent, and creators like Tynomi Banks, Matt & Omar, members of The Beaches, Roxy Earle, Ty Bridgwater, new MuchMusic VJs, and many more dancing to the summer bop. See full list below or watch the video HERE! The song comes off from his upcoming third album, which is set to release later this summer.

A refreshing visual for summer, this video showcases the song’s summer vibes through a playful retro-themed lens. “Sex on the Beach” blends romantic melodies with a nostalgic 80s rhythm, and the lyrics highlight one unforgettable night. Not only does the video capture the audience’s attention with Tyler’s alluring vocals and fashion statements of his printed beachy shirts, the video includes notable Canadian talent grooving to the feel-good track.

Tyler Shaw is a Platinum-selling artist, producer and actor. The Chinese-Canadian originally from Vancouver, BC, released his hit song “Kiss Goodnight” in 2012, and the melodic track quickly hit Platinum sales. In 2014, Tyler earned a JUNO Award nomination for ‘Breakthrough Artist of the Year’ and went on to release certified Gold tracks “House of Cards” and “Wicked,” all from his 2015 debut album Yesterday. From his 2018 sophomore album, Intuition, Tyler’s first single “Cautious” reached Top 10 at Canadian radio and is now Gold. The second single, “With You,” was a breakout hit that quickly reached Double Platinum, and was the most played single on Canadian radio by a Canadian artist in 2019. Finally, the fan favourite and romantic ballad “To the Man Who Let Her Go” quickly reached Gold status and is now Platinum. These accolades earned him a 2019 JUNO Award nomination for ‘Pop Album of the Year.’ Shaw has opened for massive international artists including Shawn Mendes and Alessia Cara, as well as toured with Selena Gomez.