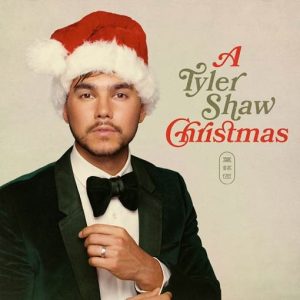 Listen to the album here.

[November 5, 2021]– On the heels of his wildly successful self-titled third album release this fall, multi-Platinum and Juno-nominated artist Tyler Shaw is back with A TYLER SHAW CHRISTMAS from Sony Music Entertainment Canada. The album brings together a gorgeous mix of holiday favourites, original songs, and some under-the-radar gems, ready to soundtrack your cozy nights and snow-filled days.

The album includes the original song “Christmas In Your Eyes,” written by Tyler for his new daughter, Everly (and featuring vocals from Everly herself). Also included is a stirring rendition of the perennial classic “O Holy Night” with The Tenors. With rich four-part harmonies, the song soars to new heights, grounded by Alex “Pilz” Vujic’s modern production. “I’ve written, recorded and covered many Christmas songs over the years and I felt it was a perfect time to bring all of these great songs together ahead of the holidays, to share with my daughter for her first official Christmas,” said Tyler of the project.  “This is a collection of my favourites that I wanted to share, which remind me of my own favourite Christmas memories, and will hopefully become the soundtrack to all new special holiday memories for listeners.”

Working together with longtime collaborators and producers, A TYLER SHAW CHRISTMAS is poised to be a great addition to the pantheon of holiday classics.

2021 has been a massive year for Tyler, with the release of his third album TYLER SHAW this fall. Having amassed over a quarter billion streams across his discography and a steady stream of massive hits, Tyler is ready to take over  Christmas, setting out on a cross-Canada tour with his “O Holy Night” collaborators The Tenors on the highly anticipated Santa’s Wish Tour. Tickets for the Santa’s Wish Tour, presented by Live Nation and sponsored by WestJet, are available here. VIP packages are also available in limited quantities for each city and venue, here.

Tyler Shaw is a Platinum-selling artist, producer and actor. The Chinese-Canadian, originally from Vancouver, BC, released his hit song “Kiss Goodnight” in 2012, and the melodic track quickly hit Platinum sales. In 2014, Tyler earned a JUNO Award nomination for ‘Breakthrough Artist of the Year’ and went on to release certified Platinum track “House of Cards” and Gold “Wicked,” all from his 2015 debut album Yesterday. From his 2018 sophomore album, Intuition, Tyler’s first single “Cautious” reached Top 10 at Canadian radio and is now Gold. The second single, “With You,” was a breakout hit that quickly reached Double Platinum, and was the most played single on Canadian radio by a Canadian artist in 2019. The fan favourite and romantic ballad “To the Man Who Let Her Go” quickly reached Platinum status. These accolades earned him a 2019 JUNO Award nomination for ‘Pop Album of the Year.’ Shaw has opened for massive international artists including Shawn Mendes and Alessia Cara, as well as toured with Selena Gomez. Last Spring, Tyler Shaw spearheaded (with Fefe Dobson) the collective artist initiative ArtistsCAN to raise funds for COVID-19 relief in Canada. The pair gathered other musicians from across the country, including Justin Bieber, Michael Bublé and Marie-Mai, to cover the classic single “Lean On Me,” with all proceeds going directly to the Canadian Red Cross COVID relief fund. Tyler’s third studio album, the eponymous Tyler Shaw, was released August 20, 2021 and features the hit bouncy summer song “Remember,” the romantic ballad “When You’re Home,” and new single “I See You.” This winter, Tyler releases his first full length holiday album A Tyler Shaw Christmas, which features a mix of perennial favourites and originals.