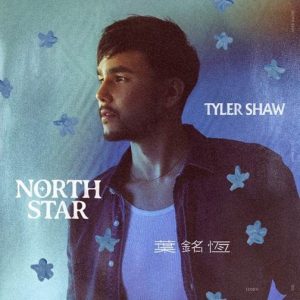 (April 8, 2021) – Tyler Shaw continues to surprise listeners at every turn. In “North Star” Shaw steers his music into an up-tempo pop-rock sound, offering a new angle from his previous single and most romantic love song to date, “When You’re Home,” via Sony Music Entertainment Canada. The tracks released so far all lead to the excitement of his upcoming full-length album due out this summer.

Released on his birthday, “North Star” is a new sound inspired by the endearing beacon of love. In its meaning, Tyler Shaw explains, “‘North Star’ is about navigating towards something or someone positive in your life who just makes you feel good. That’s what keeps me motivated and inspired.”

“North Star” shines a light on Shaw’s uninhibited, hot-blooded delivery, which thrusts through the chorus, and is a real soulful, volume-to-eleven song that showcases his knack for good time pop. The track was co-written by Shaw, Nate Ferrero (Johnny Orlando, Bülow, Virginia to Vegas, Shawn Hook), Mike Sonier (The Weeknd, Julia Michaels, Noah Cyrus), and Alex ‘Pilz’ Vujic (a long-time collaborator of Shaw’s).

Complementing the single comes the performance video showcasing Shaw’s talents as a multi-instrumentalist.  In the video, Shaw jams on his guitar, drums, bass, and impresses with his signature power-house vocals.

About the video shoot he described: “people are familiar with seeing me with an acoustic or electric guitar, and the piano on tour, but not a lot of people know that I play and love the drums. It was cool to play the role of my own band and be featured with each of these instruments. Each scene had a different character and vibe and outfit based on the instrument I was playing.”

This song comes after the success of Shaw’s “When You’re Home”; his first release in 2021 and produced by Grammy-award nominated Jon Levine (Dua Lipa, Alessia Cara, Bebe Rexha, Drake), and co-written with Alex Beitzke (James Arthur), and Henry Brill (Jack Garrat). The world is taking note of Shaw’s talents with the song dubbed one of the ‘Best New Love Songs of 2021 (So Far) by Marie Claire. In the US, “When You’re Home” also garnered praise in the states from American Songwriter, Parade, EUPHORIA., plus a wealth of international playlists including  Spotify’s ‘New Music Friday’, Apple Music’s ‘New Music Daily’ and the cover of Amazon Music’s ‘Fresh Pop’, among others.