WATCH THE “HANDS UP” VIDEO HERE 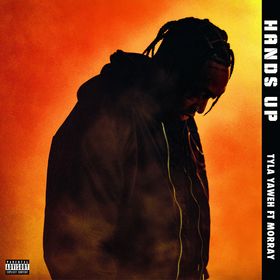 Today, hip-hop’s resident rising rockstar Tyla Yaweh releases “Hands Up,” an effortlessly cool and emotional new single featuring Morray. He’s also unleashed a striking visual for the song. Get it on all DSPs HERE via London Entertainment/Epic Records and watch the video HERE.

Cruising over contemplative guitar and spurts of thumping 808s, Tyla tells a tale of a high-stakes robbery and dissolving friendships, a deft metaphor for the pace of life in the fast lane, and the need to fight for your slice of the pie: “Now I’m just tryna get away,” he sings. “Put the money in the bag/’Cause I’ma get it anyway.” For his part, Morray unloads a barrage of quick-fire bars with a menacing delivery, an approach that matches Tyla’s subject matter, but ups the intensity.

The Arrad-directed video for “Hands Up” mirrors the cinematic atmosphere of the single itself. In it, Tyla transports a bag full of money to a stash house, only to have the FBI bust in and arrest his girl. From there, a riot, replete with explosions and chaos, ensues. Wearing black masks over their mouths, they stand with their hands up as they face off against the police, with Tyla hoping to retrieve his partner in life and crime.

Tyla’s latest effort is just the most recent sign that he’s in top gear as he puts the finishing touches on his album RAGER BØY. Having recently crossed over 850 million streams, it should come as no surprise that the L.A.-based artist is ready for his close-up. In launching the lead up to RAGER BOY, he achieved his first Billboard Hot 100 hit with 2020’s Post Malone-featuring “Tommy Lee.” He followed that up with “Stuntin’ On You,” which included a scorching DaBaby feature. Both tracks received special remixes, with SAINt JHN and Tommy Lee himself remixing “Tommy Lee,” and DDG and Dame D.O.L.L.A. joining Tyla on a new version of “Stuntin’ on You.” 2021 kicked things into overdrive with the release of the epic “All The Smoke” (feat. Gunna & Wiz Khalifa), which became the theme of NASCAR’s Daytona 500 this year. Moost recently Tyla shared the summer anthem “Back Outside.” In addition to his run of solo successes, he’s also appeared on a string of engaging singles by other artists, including Jay Wheeler’s “Take My Life,” RMR’s “Vibes,” and DDG’s “Hakuna Matata.”

Alongside the accolades, Tyla Yaweh continues to receive acclaim. NME has dubbed him “emo-rap’s next icon” before stating “Yaweh has quickly emerged as the brightest newcomer among hip-hop’s current crop.” Flaunt Magazine exclaimed “Tyla Yaweh is a true rockstar in every aspect of the word, arriving with undeniably lit energy and one of the smoothest, sultriest voices” while Wall Street Journal Magazine called him one of the “biggest rising talents in Hollywood.” Billboard may have put it best, stating that “Tyla Yaweh is undoubtedly on the precipice of stardom.”

As he does so, the Orlando-born rising superstar continues to light up 2021. Get ready to continue raging.