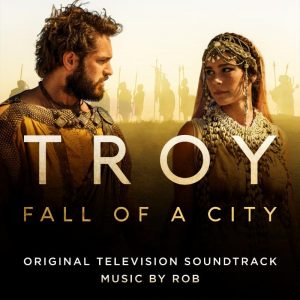 Directed by Emmy award-winning Owen Harris, Mark Brozel and John Strickland with a screenplay by David Farr, Nancy Harris, Mika Watkins and Joe Barton the television series stars Jonas Armstrong, David Avery, Bella Dayne, Aimee-Ffion Edwards, Alfred Enoch, David Gyasi, Johnny Harris, Louis Hunter, Hakeem Kae-Kazim, Alex Lanipekun, Joseph Mawle, Frances O’Connor, Chloe Pirrie, David Threlfall, Tom Weston-Jones.
Troy: Fall of a City is executive produced by Derek Wax and David Farr for Wild Mercury, in association with Kudos, both part of the Endemol Shine Group, and Christopher Aird for the BBC. It is produced by Barney Reisz. The eight part TV drama tells an epic story of love and war, intrigue and betrayal: when Helen and Paris fall in love, they trigger a chain of events that threatens their families and the city of Troy.
Combining thrilling adventure with heartbreaking intimacy, it explores primal emotions, the psychological repercussions of human actions and life-changing decisions amid the devastation and destruction of war.
The series was commissioned by BBC One and is a co-production between BBC One and Netflix. BBC One started airing the show on 17 February 2018 in the United Kingdom. The show will be available on Netflix internationally.
Composer Rob says about the soundtrack: “Antique instruments and ancient music have always fascinated me. The emotions brought by non-tempered scales or the simple acoustics from native drums have the power to create real new experiences in music. And to be sent in time immemorial is a great powerful experience. I have tried to experiment with those ideas in Troy, using different drums and flutes, of archaic percussions. But of course, the great Mythology is a beautiful landscape of drama and emotions. I tried to keep always melodies and textures deep and emotional. I am a very romantic composer, and I truly believe in the power of melodies. The great love story we see in Troy had to get its own melody, and so did to betrayals, the family tensions and even the diplomatic dead ends.
Scoring Troy felt just as epic as the journey of Paris himself, we eventually produced more than 5 hours of music, I had the feeling I was one the Trojan soldiers, fighting against God’s will!”

The track list of TROY: FALL OF A CITY (Original Television Soundtrack) is as follows:

About ROB:
Robin Coudert, also known by his stage name Rob, is a French musician, singer- songwriter,
producer and film score composer. Rob has played the piano since childhood. He studied at the Ecole Nationale Supérieure des Beaux- Arts in Paris. In 1998, he released his first EP Musique pour un Enfant Jouet. In 2001 the album Don’t Kill came out on Source Records and in 2002 the album Satyred Love. Rob worked with French singer, songwriter and multi-instrumentalist Sebastien Tellier, on stage and in studio, and with the Grammy® award-winning band Phoenix. In 2005, he composed the original music of the short film, Pink Cowboy Boots, written and directed by Maria Larrera. He also produces several artists such as Melissa Mars (2005), Zaza Fournier (2008), Alizée, Adanowsky (2010), Leon Larregui (2011 & 2015) and Barbagallo (2016).
Rob has been asked to write music for film including art house films: Belle Epine, Jimmy Rivière (2010) and Planetarium (2016), mainstream comedies: Radiostars (2012), Populaire (2013), horror movies: Maniac (2013), Horns (2014), and Amityville: The Awakening (2017), as well as dramas: Made in France (2016) and Every Secret Things and Revenge (2017).
Rob found a new field of experiment in scoring TV Shows with Le Bureau des Légendes (The Bureau) (2014-present) and TROY: FALL OF A CITY.
Working in collaboration with producer Jack Lahana since his debut album, they have created Hippocampus Studio in Paris.