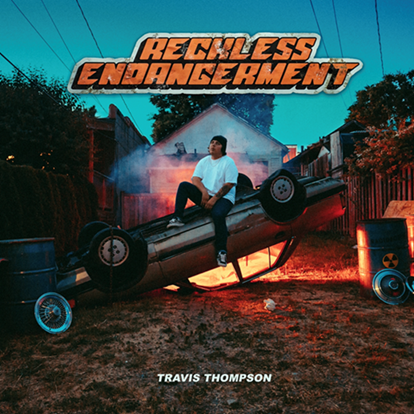 Get the album HERE via AMBAUM/Epic Records.

Last week, he primed fans for the arrival of the full-length with the single “Malice” [feat. Ben Zaidi]. Fortified by airy keys and acrobatic wordplay, the track staked out a spot on Spotify’s coveted “New Music Friday” as HotNewHipHop declared it “new heat.” It remains just one of many standouts on Reckless Endangerment though. Watch the cinematic visual for the song HERE.

The album commences with the plink of an out-of-tune piano that bleeds into church organ on “Duality” as Travis raps with focus, flair, and fire. It follows a personal thread as he examines depression and darkness on the somber, yet soulful “Mad Mad World.” Meanwhile, he delivers one of the most intriguing and inimitable collaborations of the year by way of “Glass Ceiling” [feat. Macklemore, Sir Mix-A-Lot, & Prometheus Brown]. Over ominous production, these four MC’s initiate a head-spinning lyrical crossfire. He gets confessional on “Pray For Me” before delivering tightly wound rhymes over stark and simple scoring on “Don’t Run” [feat. A-Trak]. Everything culminates on the title track “Reckless Endangerment” where his delicate delivery echoes above acoustic guitar and horns before the powerful refrain, “Maybe one day we can live again.”

To celebrate the release, tonight Travis will take the stage at the Showbox in Seattle, WA, giving die-hard fans the first live taste of the album. ADÉ and Nyles Davis are set to join as special guests.  Recently, he revealed the details for a pair of headline gigs across coasts: he takes the stage at the Moroccan Lounge in Los Angeles on October 6 and Kitting Factory in Brooklyn, NY on October 17.  Tickets can be purchased at ambaumblvd.com.

Reckless Endangerment follows up his RUNAWAYS EP, which tallied over 20 million Spotify streams and garnered tastemaker praise. Earmilk wrote, “Thompson is confident in his sound and rightfully so, this young rising rapper strapped with verbal dexterity, wide-ranging vocal control, and multisyllabic rhyme schemes. Sonically, he can be compared to a more aggressive, quirky Chance the Rapper; lyrically, he toys with a poetic variety of subjects.”

Get caught up in Reckless Endangerment with Travis Thompson—out now.

Hailing from the suburbs of Burien, WA, buzzing rapper Travis Thompson threads together emotionally charged and evocative stories with each and every rhyme. He blasted onto the mainstream radar during 2017 after earning the endorsement of fellow Pacific Northwest titan Macklemore who invited him to open up a sold-out North American tour and duet on a seminal performance during The Tonight Show Starring Jimmy Fallon. Capitalizing on this momentum, he rolled tape on his 13-track independent full-length YOUGOOD? and accompanying feature-length film. Appropriately, it premiered at a sold-out movie theater in his hometown. Along the way, “Need You” eclipsed 5 million Spotify streams with numerous other songs crossing the one-million mark. 2019 sees him positioned for stardom with a new deal for Epic Records, his RUNAWAYS EP and full-length debut, Reckless Endangerment.