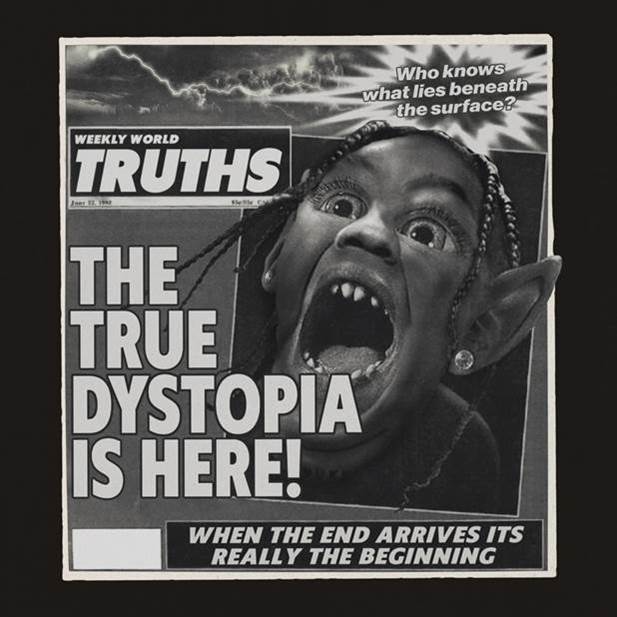 HOUSTON, TX (November 5, 2021) – Today, multi-platinum hip-hop titan Travis Scott returns with “ESCAPE PLAN” and “MAFIA,” After he teased “ESCAPE PLAN” during his rowdy headlining set at Rolling Loud New York, demand from fans has been deafening. To celebrate the release of the dual singles, the Texas-born superstar has showcased the artwork for each single on the front and back of today’s edition of The Houston Chronicle.

Scott’s releases today align with the first day of his third-annual Astroworld Festival, which sold out in less than an hour. On Friday, November 5, and Saturday, November 6, 100,000 total guests will turn up with Scott and a genre-spanning lineup—including Tame Impala, SZA, Bad Bunny, and many more—at NRG Park in Houston, Texas. Fans unable to attend the festival can stream Scott’s headlining set on Apple Music at 7:00 PM PT / 10:00 PM ET Friday evening.

Both the largest artist-curated music festival in the world and the largest music event in Scott’s hometown of Houston, Astroworld Festival is an extension of Scott’s personal creativity and unique vision. With a new theme, “Open Your Eyes to a Whole New Universe,” the critically acclaimed rapper turned mainstream culture phenom has once again curated and produced a grand, multi-stage music festival experience that captures the beloved spirit of AstroWorld, the legendary and now-defunct amusement park that Scott visited countless times during his childhood. Solely responsible for selecting the festival’s music lineup, Scott has chosen some of today’s most sought-after music acts for past festivals, including Post Malone, Rosalía, Pharrell Williams, Da Baby, Lil Wayne, Young Thug, Playboi Carti, and Megan Thee Stallion.

A portion of proceeds from the Astroworld Festival will be donated to the festival’s official charity partner, Cactus Jack Foundation. Founded by Scott, the nonprofit organization looks to empower and enrich the lives of youth by providing access to education and creative resources to ensure long-term success. Please visit CactusJack.Foundation to learn more.

For more information, as well as to stay up-to-date on all Astroworld Festival news and announcements, please visit the following channels, as well as watch the official trailer for the 2021 festival via YouTube. These new singles are Scott’s first since his 2020 hit “FRANCHISE.” And with “ESCAPE PLAN” and “MAFIA” out now, fans have even more to be excited about as Scott takes the stage tonight—and as he makes even bigger plans for the rest of 2021 and beyond.