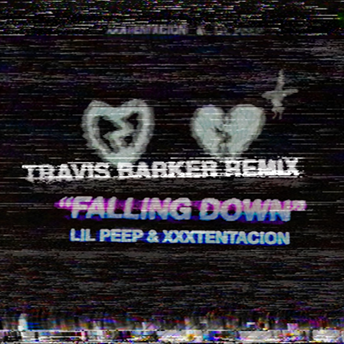 Today, the Travis Barker remix of Lil Peep and XXXTENTACION’s hit track “Falling Down” was released via Columbia Records, with a video directed by Ramez Silyan.  Originally recorded as “Sunlight on Your Skin” with ILOVEMAKONNEN, the Travis Barker remix is a highly-charged take on the Lil Peep and XXXTENTACION track, reminiscent of “Adam’s Song” from Blink-182’s iconic album, Enema of the State. The original “Falling Down” is now certified platinum and peaked at #5 on the Billboard Hot 100 Chart in Canada.

Lil Peep’s (posthumous) sophomore album Come Over When You’re Sober, Pt. 2 was released in November 2018.  The album debuted at No. 4 on the Billboard 200 Album Chart in the U.S. and Canada, and was included on The New York Times’ “28 Best Albums of 2018.” Lil Peep’s music has continued to achieve chart success with “I’ve Been Waiting,” his collaboration with ILOVEMAKONNEN featuring Fall Out Boy. The track peaked at #13 on the U.S. Top 40 charts and is now certified gold. Most recently, Lil Peep’s life and genre bending style were explored in the documentary Everybody’s Everything, which takes its title from one of Peep’s last Instagram posts.  The film was shown at SXSW in 2019 and was named one of the “12 Biggest Winners at SXSW” by Variety.

The “Falling Down” remix is the second collaboration Travis Barker has released this month, arriving shortly after his joint EP with 03 Greedo, Meet The Drummers, and following his production work on “F9mily” from Lil Nas X’s debut EP 7. Already one of music’s most prolific names, Barker continues to explore genres and mediums ranging from punk rock to hip hop and pop, creating his own culture along the way. Previously working with the likes of RZA, Ty Dolla $ign, Run The Jewels, Kid Cudi, Trippie Redd, Halsey, and more.