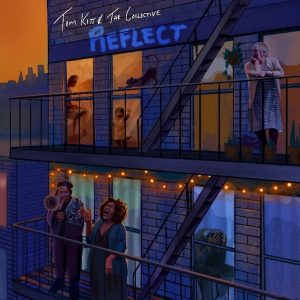 Featuring vocals by Kitt and his 16-year-old son Michael, “Fly Away” was written for Kitt’s band in the late 1990s.

“It’s a dream to get to record this track, because it’s always been one of my favorites,” Kitt said of the song. “My son Michael was a real source of strength for me during many difficult days during the Broadway shutdown, so it’s very meaningful to have his voice on this track. The lyrics are about someone who is faced with overwhelming pain and uncertainty. The character in this song is giving themselves permission to escape their circumstances in order to find resilience, peace, and ultimately, healing.”

In addition to “Fly Away” and the already-released single “Breathe” (co-written with and performed by Tony Award nominated Jagged Little Pill star Elizabeth Stanley), Reflect also features songs co-written and performed by some of Broadway’s biggest stars, including Adrienne Warren, Mandy Gonzalez, Michael McElroy, Jenn Colella, Danny Burstein, Javier Muňoz, Lauren Patten, Jerry Dixon, Heidi Blickenstaff, Brian d’Arcy James and Pearl Sun along with Kitt’s own children Julia and Michael Kitt. An album about finding your voice when you need it most, Reflect is a true collaboration that captures the hope and heartbreak of the tumultuous times we’re living through.

“The King of Our Destruction”

“This Too Shall Pass”

“Sweep Your Own Snow”

Tom Kitt. As a composer, arranger, orchestrator, and music supervisor, Tom Kitt’s spirit courses through film, television, theater, music, and beyond. He has quietly emerged as one of this century’s most prolific composers. He garnered the 2010 Pulitzer Prize for Drama and two Tony® Awards Next To Normal and won a 2021 Grammy Award for his work on the Broadway Cast Recording of Jagged Little Pill. His body of work as a composer spans everything from Almost Famous [written with Cameron Crowe] and High Fidelity to Dave and If/Then for which he picked up a Tony® nomination. While as a music supervisor, arranger, and orchestrator, his influence resounds in The SpongeBob Musical, Grease Live!, Jagged Little Pill and Green Day’s American Idiot. Collaborating with the legendary rock band, he also contributed additional arrangements to their GRAMMY® Award-winning album 21st Century Breakdown and their trilogy, ¡Uno! ¡Dos! ¡Tré! Tom notably took home an Emmy Award as co-writer (with Lin-Manuel Miranda) for the 2013 Tony® Awards opening number, “Bigger.” Television songwriting credits include the 2019 Tony® Awards Opening Number, “Live!,” Royal Pains, Penny Dreadful, and Sesame Street. Other credits range from the Pitch Perfect franchise, 2Cellos featuring Lang Lang (Live and Let Die), and The Kennedy Center Honors to 13, Hair, and These Paper Bullets. Next up for Tom, The Visitor launches at Public Theater, and his show Flying Over Sunset opens at Lincoln Center.