SINGLE AND VIDEO FOR “WITHOUT A PRAYER” OUT NOW 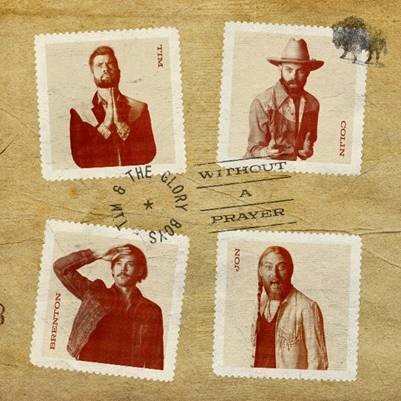 Following the Top 20 Canadian Country Radio success of their Sony Music Entertainment Canada debut single “When You Know You Know”, Tim & the Glory Boys are back with the wholesome love song “Without A Prayer”.

Pulling on an abundance of heartstrings, “Without A Prayer” is an upbeat track about being at a loss without a companion. The song illustrates needing that second half to feel whole, about feeling incomplete and without a prayer, until the excitement of finding a partner who completes you. “Without A Prayer” adds a rollicking, poppy twist to the bands heartfelt bluegrass leanings and is destined to become a sing-a-long, country/bluegrass classic.

The video for “Without A Prayer”, Directed by Travis Nesbitt, is a comical tale of the struggles the band faces as they gather to perform. After a long night out, Tim Neufeld wakes up in his RV and sets out on a frantic adventure to pick up his bandmates for the perfect performance. Shot in the stunning landscape of Abbotsford B.C., the band’s humorous side is on full display.

Those who know the band are aware of a strong sense of family that filters through all of Tim & The Glory Boys’ music.

“It’s more important than the music,” says Neufeld. “It inspires the music and is what empowers me to go on. It certainly inspired the new single “Without A Prayer”.

If the success of recent single “When You Know You Know” is any indication, “Without A Prayer” looks to be in good company at streaming services and country music radio. “When You Know You Know” garnered more than 1.8M streams and was featured on Spotify’s highly influential All About Country playlist. The song captures a perfect moment that is both universal and unique.

Tim & The Glory Boys are a four piece country band fronted by lead singer Tim Neufeld, who has toured the world for over a decade, shared the stage with countless Canadian Country, Roots and Gospel artists, and won multiple JUNOS, Dove, and Covenant awards. The Glory Boys include Colin Trask (dobro/percussionist) and Brenton Thorvaldson (banjo/guitar). Together, the band has been entertaining live audiences across Canada since 2013 with their unique blend of boot-stompin’ country bluegrass, elaborate production and a healthy dose of blue-collar humour. The band is managed by Brad Rempel, an artist and songwriter in his own right and half of the Nashville-based duo, High Valley.