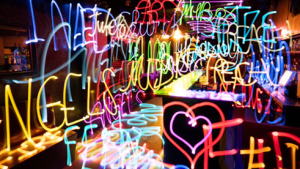 Of the video Tim states, “We wanted to give the fans something really special with this lyric video and we were blown away with Patrick’s work. He’s an artist who uses light as paint and darkness as a canvas. That couldn’t be more perfect for NEON CHURCH.”

“Light and sound are a fundamental marriage in the world of creation. When the perfect match comes together; real art takes form. For NEON CHURCH, I wanted to highlight the emotion of Tim’s song,” Patrick explained.

Rochon, originally from Montreal, has collaborated with a number of companies including Infiniti Motors, Adobe, and Red Bull to name a few, and his work has appeared in a variety of industries across the world including advertising, fashion, documentaries and live performances.

McGraw most recently released “NEON CHURCH” and “Thought About You,” marking his  first new solo music since 2015. The tracks have critics raving with Billboard saying “McGraw heartbreakingly opens ‘Neon Church’ with his characteristically classic country vocals……‘Thought About You’ is equally as powerful,” and Rolling Stone declares “Thought About You” “a sweeping rocker.” Both tracks are available to stream and download now via Columbia Nashville/McGraw Music. McGraw has indicated both songs are part of an upcoming 2019 album project.

TIM MCGRAW – His unparalleled career includes 43 number one radio singles, 16 number one albums and countless industry awards and accolades. His unique chart achievements include having three singles in the Top 20 of the radio charts on multiple occasions, as well as having two singles spend over 10 weeks at number one.  His last solo project spawned one of the biggest hit singles of all-time, “Humble and Kind,” whose message continues to impact fans around the world including a Spanish version sung by McGraw. He has routinely been cited as one of the biggest touring artists in the history of country music.