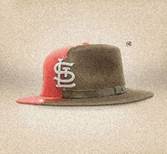 /ˈhärtˌland/ the central part of our nation that consists of 19 states including Missouri with St. Louis right in the middle. For some they call it the “flyover region” but for those 99 million born, raised or living there -it is where our nations grit comes from, where life can be hard but perseverance is harder and the heartland is where NELLY lives.

“I have too much respect for country music and country artists to call this a country album or suddenly decide NELLY is goin country!  I had country influences growin up and this album fuses country style with NELLY style and I think what we have is music that brings people together with their love of music.”

St. Louis is situated in the heart of the Heartland, and for twenty-one years, NELLY has been responsible for driving up the region’s heart rate with his celebratory bangers like “Country Grammar,” “Ride Wit Me,” “Hot in Herre,” “Over and Over” with Tim McGraw, “Cruise” with FGL and the near double platinum certified, “Lil Bit” featuring FGL.

“The HEARTLAND album and its title is a nod to the people from the heartland where I’m from. They work hard, they party hard, they love all types of music and they support NELLY accepting me doin what I love to do- crossing over music boundaries and genres to create good music. HEARTLAND is inspired by country music, my friends in country music all with a Nelly spin on it.” says Nelly, he further explains “It’s my appreciation for country music, my thanks to country music for allowing Nelly to be a part of it.”

Nelly’s lyrics from the upcoming song COUNTRY BOYS DO, featuring Tyler Hubbard just about sums up his fun-loving relationship to Nashville-

“I’m cranking hits up in Nashville

So many I see why they call it smashville

Another one ima call it cashville

Ya headbangers you gonna need some Advil”

NELLY’s career strings together a series of firsts like being certified a double diamond artist, he was the first hip hop artist to cross over into country when he collaborated with country star, Tim McGraw, NELLY has graced the top spots on multiple charts including Rap, RnB, Pop, Country and top 40, he performed twice at Super Bowl, he performed his hip hop hits with multiple symphonies,  has been labeled one of the best ever rappers, one of the highest grossing artists , his hit song “Dilemma” just hit one billion streams on YouTube, a platform not even invented when the song was recorded.

His newest single “High Horse” debuted on Good Morning America and is out now featuring Blanco Brown and BRELAND.

Nelly has had huge success in both Hip Hop and Country including his initial country collaboration with Tim McGraw in 2004 with “Over and Over,” to his Diamond certified success on Florida Georgia Line’s “Cruise,” Jimmie Allen’s “Good Times Roll,” Kane Brown’s remix of “Cool Again,” his own remake of Thomas Rhett’s Die A Happy Man.  Nelly recently reunited with country music heavyweights Florida Georgia Line for his latest newly platinum certified single “Lil Bit” out now via RECORDS/Columbia, and on THE HEARTLAND album, listen below. Supported by performances on Dancing with The Stars, The Voice Finale, American Music Awards, Dick Clarks New Years Eve and CNN’s Fourth of July show Lil Bit keeps on gaining fans while trailblazing its own path of firsts on both the country and pop charts.

Nelly is a double diamond selling, multi-platinum, 3x Grammy award-winning rap superstar, entrepreneur, philanthropist, and actor. Over the past two decades he has continuously raised the bar for the entertainment industry since stepping on the scene in 2000 with his distinctive vocals and larger-than-life personality. He has been referred to as “one of the biggest stars of the new millennium” and the RIAA ranks Nelly as the fourth best-selling rap artist in American music history, with 21 million albums sold in the United States. He just celebrated his 20-year anniversary of RIAA certified Diamond “Country Grammar” and is about to celebrate his 20-year anniversary of Nellyville with Hot n Herre and Dilemma which also just reached one Billion streams all while Lil Bit climbs to the top of today’s country and pop charts!