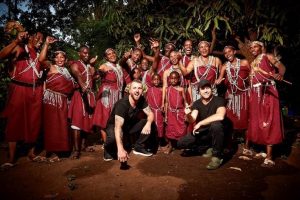 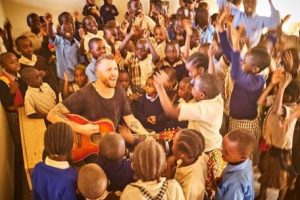 (August 19th, 2019 – Toronto, ON) Today on World Humanitarian Day, Three Days Grace and World Vision Canada release the video for the Kenya Project. The Kenya Project is a MTN of Hope social justice initiative created by Three Days Grace. Visit http://mtnofhope.com/. The project protects Kenyan children from violence and provides them with clean water to ensure they are both safe and healthy. On their 2018 Canadian Fall tour, $1 from every ticket sale went towards this project.

In the fall of 2018 Three Days Grace band members, Neil Sanderson and Matt Walst, visited the Mwatate and Taveta communities near Nairobi with World Vision Canada. In these communities they were inspired by great programs that help protect victims of abuse, particularly those with disabilities. Matt and Neil saw the big differences being made by clean water projects, and how much work is still to be done. That is why Three Days Grace are committed to walk together with these children to not only save, but transform their lives for the better. Three Days Grace hope to empower their fans to join them so more children can be safe, healthy and have a chance to reach their full potential.

Three Days Grace’s drummer Neil Sanderson states, “We were inspired everywhere we went and by everyone we met because what we experienced isn’t what we thought it would be.  I learned that poverty is not hopelessness.  Hope is around every corner, sometimes you just have to look for it.”

“When you meet communities of families and children who mostly live off $2 a day, but greet you with the biggest smiles and are so full of hope and resilience, it makes you take stock of your life and how lucky we are to be born in Canada. We were given every resource and freedom to create opportunities at making a career as a band. Now we have an opportunity to use our career to build awareness and invite our fans from all over the world to join us at creating change to people that can use a hand up.”

The band are currently completing their extensive summer tour with Breaking Benjamin performing hits from their sixth full-length album OUTSIDER. With the band’s latest single “Right Left Wrong” Three Days Grace have once again have made history, breaking their own record for the most #1 singles on U.S. Billboard’s Mainstream Rock Songs Chart, with their 16th, and Mediabase’s Active Rock Chart, with their 15th. This achievement also marks three separate runs of three consecutive #1 Singles from the same album, which include One-X (“Animal I Have Become,” “Pain,” “Never Too Late”), Life Starts Now (“Break,” “The Good Life,” “World So Cold”), and Outsider (“The Mountain,” “Infra-Red,” “Right Left Wrong”). Since 2003, the band has staked a spot amongst the hard rock vanguard, breaking records, toppling charts, moving millions of units worldwide, and making history by holding the all-time record for “most #1 U.S. singles at Active Rock Radio ever” with 15. In 2015, Human marked the group’s second straight #1 slot on the Billboard Top Hard Rock Albums Chart and Nielsen Soundscan Canada’s Hard Rock Albums chart as well as their fourth consecutive debut in Top 20 of the Top 200 (#2 on Nielsen Soundscan Canada’s Top Albums chart). It spawned two #1 singles “Painkiller” and “I Am Machine,” signaling their 13th overall and 5th consecutive number ones on the U.S. Active Rock Radio chart (#2 and #6 in Canada, respectively). Moreover, the four-piece consistently averaged a staggering 3.9 million monthly listeners on Spotify—remaining one of the most listened to rock bands in the world. In 2012, Transit of Venus soared to the Top 5 of the Top 200, Top 5 on Nielsen Soundscan Canada’s Top Albums chart and garnered a nod for “Best Rock Album of the Year” at the Juno Awards. The seminal One-X [2006] notched an RIAA and Music Canada triple-platinum certification as Three Days Grace [2003] was minted platinum in the U.S. as well as double platinum in Canada and Life Starts Now went gold in the U.S. and platinum in Canada. To date, their veritable arsenal of U.S. number one includes “Chalk Outline,” “The High Road,” “Misery Loves My Company,” “World So Cold,” “Good Life,” “Break,” “Never Too Late,” “Animal I Have Become,” “Pain,” “Just Like You,” and “Home.

World Vision is a relief, development and advocacy organization working to create lasting change in the lives of children, families and communities to overcome poverty and injustice. Inspired by our Christian values, World Vision is dedicated to working with the world’s most vulnerable people regardless of religion, race, ethnicity or gender. World Vision is reaching one new person with clean water every 10 seconds and reaches four more schools every day with clean water. 1.7 billion Children are affected by some type of violence each year. 10.2 million Children are benefiting from World Vision child protection programming