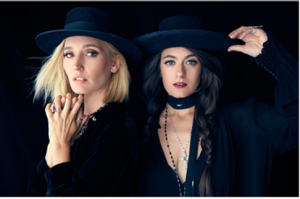 Nashville, TN – Newly-signed to Sony Music Nashville, country duo The Sisterhood are confirmed to make their Grand Ole Opry debut on Sunday evening, August 20th.  The Opry this particular night is a momentous one as it is celebrating the once-in-a-lifetime Total Solar Eclipse in the U.S. which occurs the following day, as Nashville is in the direct path. In addition to The Sisterhood, the all-star line-up for the two special Sunday night “Total Eclipse” Opry performances on August 20th includes Little Big Town, Darius Rucker and Wynonna, among others.

Alyssa Bonagura and Ruby Stewart make up The Sisterhood, and both have a compelling musical heritage. Alyssa is daughter of Kathie Baillie and Michael Bonagura, the core of the country band Baillie & The Boys, and Ruby’s father is rock icon Rod Stewart.

The Sisterhood recently signed their long-term recording contract with Sony Music Nashville at performance at Nashville’s 3rd & Lindsley.  The duo had just returned the day before from opening Rod Stewart’s 10-city stadium tour in the U.K. on which they performed an hour-long set featuring their country rock melodies and soaring rich harmonies.