WATCH THE VIDEO | LISTEN TO THE TRACK

Toronto, ON (November 11, 2020) – Gearing up for the November 20th release of their forthcoming album 10, THE PIANO GUYS today debut a new music video for album track “Für Elise Jam” – watch here. Known for their strikingly original visuals, The Piano Guys took the “Für Elise Jam” video to the next level, partnering with virtual reality company Massive Technologies and their app AR Pianist for a hyper-realistic performance visual featuring a 3D avatar of The Piano Guys’ Jon Schmidt performing alongside a real-life Steven Sharp Nelson. The second single off their upcoming anniversary album, “Für Elise Jam” began as a live rock ‘n’ roll-tinged improvisation of the Beethoven classic from The Piano Guys, and is the perfect representation of the creativity and spirit of the group’s storied career – listen here.

Of the track, THE PIANO GUYS’ Jon Schmidt says, “Dating back to my solo performance days, and alongside Steven Sharp Nelson for The Piano Guys’ shows, ‘Für Elise Jam’ has always been a fan favorite. At the moment when an audience resigns itself to listening to another performance of the most performed piano piece in existence, the arrangement is deviously thrown on its head as it morphs into flat out rock ‘n’ roll.”

Created in partnership with Massive Technologies and using their revolutionary AR Pianist app, the music video arrives alongside an interactive learning experience for users of AR Pianist. Users of the app simply point an Apple® iOS or Android™ device at any piano, and through the magic of machine learning, the app will seat pianist Jon Schmidt at the keyboard with precision within one centimeter. Onscreen, the keys will move as his fingers strike them. The user can walk around with six degrees of freedom (3D movement and rotation) to view his playing from any angle, as well as zoom in on the keyboard and slow down playback up to 100 times to view his exact technique and fingering. The end result is as if Jon is right there giving a personal concert and music lesson.

Of their partnership with Massive Technologies, Jon Schmidt says, “The AR Pianist app is an incredible experience and a technological wonder. We created the ‘Für Elise Jam’ music video using AR Pianist, and my own family members didn’t realize that it was my avatar performing in the video. When I told them it wasn’t me (in my human form) sitting at a piano and being filmed (as we’d do for any normal TPG video), their collective jaws hit the floor!”

Available for preorder now, 10 arrives on November 20 as a 2-disc album reflecting on The Piano Guys’ greatest career moments thus far, featuring 15 newly-remastered, fan-favorite tracks from the past decade as well as introducing their next chapter with 7 brand new songs and 6 tracks never-before-released on CD. Providing an overview of the group’s catalog thus far, the bonus disc on 10 includes “A Thousand Years,” “Fight Song/Amazing Grace,” “Sky Full of Stars,” and other staples. Heralding the new material, The Piano Guys introduced the first disc of the album with lead single “You Say,” combing Lauren Daigle’s uplifting ballad with Beethoven’s “Sonata Pathétique” to create a rich mosaic of strings and piano – watch the music video here.

Over the course of the past decade, The Piano Guys have reached a series of unprecedented milestones on an unbelievable journey around the globe. Among countless memories, the gold-selling Utah quartet—Jon Schmidt [pianist, songwriter], Steven Sharp Nelson [cellist, songwriter], Paul Anderson [producer, videographer], and Al van der Beek [music producer, songwriter]—could cite gravity-defying performances on a speeding train, playing under the shadows of international wonders a la The Great Wall of China, or gracing world-famous stages such as Carnegie Hall, Red Rocks Amphitheatre, Sydney Opera House, and beyond. The collective of friends and collaborators turned the first page of the story in 2011. The musicians initially captivated listeners everywhere on YouTube before visiting dozens of countries on tour. They built a catalog comprised of seven studio offerings, two Christmas albums, and a live record. Along the way, they gathered nearly 4 billion global audio streams, accumulated 2 billion-plus YouTube views, and achieved six #1 debuts on the Billboard Top Classical Albums Chart. In between sold out shows on five continents, the boys earned gold certifications for their self-titled album The Piano Guys and single “A Thousand Years.” Additionally, they would be featured in The New York Times, Fast Company, BuzzFeed, Mashable, People and on CBS Sunday Morning in addition to performing on TODAY Show, Good Morning America and The Tonight Show. 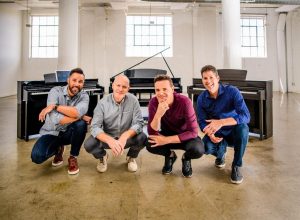