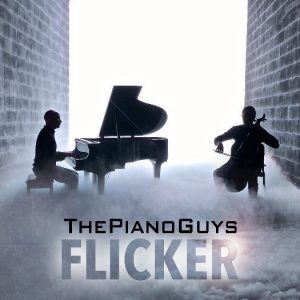 (November 13 – Toronto) With over a billion YouTube views across their 50+ music videos, Billboard chart-topping group, The Piano Guys, release their latest video – a rendition of Niall Horan’s “Flicker” – watch the video HERE. The audio track is also available now via all download and streaming services.

Filmed entirely on the iPhone X, The Piano Guys challenged themselves to conceptualize, write, record, mix and master “Flicker” in less than 24 hours. They also gave themselves just 60 minutes to shoot the video to test the iPhone X’s ease-of-use. If that wasn’t enough, they even chose to film at the Tuacahn Amphitheatre in Utah in the middle of the night, while on tour between two back-to-back concerts.

“This is the first music video (at least that we know of) filmed exclusively on the new iPhone X,” said The Piano Guys.  “We wanted to truly test its features. We filmed in 4K (2160p resolution – 3840 pixels × 2160 lines) at 24 frames per second. This gives the video a more film-like look. Filming this in the middle of the night also allowed us to test the iPhone X’s low light capabilities. We even utilized its dual lens feature to create different focal lengths.”

The Piano Guys – Steven Sharp Nelson, Jon Schmidt, Al Van der Beek and Paul Anderson – became an online sensation by way of their immensely successful series of strikingly original self-made music videos, which has far surpassed 1 billion views and garnered over 5 million subscribers on YouTube. They’ve made over 50 music videos since 2011, including their breakout hit, an innovative multi-handed version of One Direction’s “What Makes You Beautiful” and a gorgeous reinvention of the hit song “Let It Go” from Disney’s Frozen. Christmas Together is the Utah-based classical-pop group’s seventh major label album on Portrait/Sony Music Masterworks, following: Wonders,The Piano Guys,The Piano Guys 2, A Family Christmas, The Piano Guys – Live! and Uncharted.

For more information on The Piano Guys and tour dates visit: