KICK OFF THE HOLIDAY SEASON WITH NEW VIDEO FOR

“WHAT CHILD IS THIS” 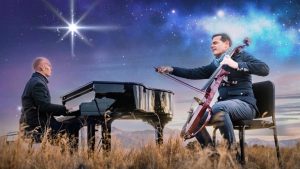 (DECEMBER 8 – TORONTO, ON) – Gearing up for the holidays, THE PIANO GUYS today share the music video for their fan-favorite rendition of the Christmas classic “What Child Is This.” Embracing the spirit of the season, the group filmed the visual in “Little Jerusalem” in Goshen, Utah, performing outside under cover of night, yet sheltered in the warmth of the locale’s life-size replications of biblical Jerusalem – watch here. The track is available on THE PIANO GUYS’ 2017 holiday album, Christmas Together. To continue the holiday celebration and commemorate the group’s 10th anniversary, THE PIANO GUYS are set to appear on Good Morning America’s GMA3 and perform “What Child Is This” on December 22 at 1 pm ET on ABC.

Of the new video, THE PIANO GUYS say, “In our arrangement of “What Child is This” we wanted to depict some of the feelings that must have been present at the manger scene at the center of the Christmas so long ago — awe, wonder, consternation, all tempered and sweetened with hope. As people listen we want them to hear and feel the propitiousness and vulnerability of the birth of the Baby Jesus — a baby born in the humblest of circumstances, and yet born with the ability to overcome the world and make all things right — a story, perhaps, meant to comfort all who feel vulnerable and need hope in their own life. We were especially thrilled to be able to return to the same Jerusalem set where we filmed “O Come O Come Emmanuel,” hosted by  the Church of Jesus Christ of Latter-day Saints, which is now the set of the series The Chosen, a show which we are honored and very excited to be able to promote.”

THE PIANO GUYS just released their tenth album, 10—available now from Sony Music Masterworks. The same day, a music video for the album’s latest single “Someone To You” arrived. The new album has resonated with audiences worldwide, racking up more than 60M audio and video streams to date globally. The group heralded 10 with a livestream party on release day, directly engaging and speaking with fans about their tenth anniversary and the record.

THE PIANO GUYS’ 10 nods to the past as it paves a path for the future. The 2-disc album reflects on THE PIANO GUYS’ greatest career moments thus far with 15 newly-remastered fan-favorite tracks from the past decade and introduces their next chapter with 7 brand new songs, plus 5 tracks never-before-released on CD. The group launched 10 with the release of “You Say,” uniting Lauren Daigle’s chart-topping smash “You Say” with classic Beethoven to create a rich mosaic of strings and piano. The track was released alongside a gorgeous music video featuring iconic scenery from their home state of Utah, which has since amassed 1.7 million YouTube views.

THE PIANO GUYS followed up “You Say” by infusing a fresh fire into “Für Elise Jam,” pairing the rock ‘n’ roll-tinged improvisation of the Beethoven classic with their first-ever foray in AI for the track’s video. Partnering with virtual reality company Massive Technologies and their app AR Pianist for a hyper-realistic performance visual featuring a 3D avatar of THE PIANO GUYS’ Jon Schmidt performing alongside a real-life Steven Sharp Nelson. Of the track, Steven says, “It was an improvisation Jon and I would do back in the day. We’d play around with ‘Für Elise.’ At his concerts, he often started with a classical entrance. All of a sudden, he’d throw some rock and jazz onto it, turning the piece on its head. It’s moments like this that really gave birth to THE PIANO GUYS.”

Over the course of the past decade, THE PIANO GUYS have reached a series of unprecedented milestones on an unbelievable journey around the globe. Among countless memories, the gold-selling Utah quartet—Jon Schmidt [pianist, songwriter], Steven Sharp Nelson [cellist, songwriter], Paul Anderson [producer, videographer], and Al van der Beek [music producer, songwriter]—could cite gravity-defying performances on a speeding train, playing under the shadows of international wonders a la The Great Wall of China, or gracing world-famous stages such as Carnegie Hall, Red Rocks Amphitheatre, Sydney Opera House, and beyond.

“I remember playing cello on the edge of a rocky oceanside cliff with the waves splashing up, and all I could think was, ‘Man, am I glad my dad made me practice’,” Steven laughs. “When you hit double digits on anything, it makes you do a double take and causes introspection. We’re in a mood of real gratitude. There have been highs, lows, and extreme times. If you take the running average, it’s been quite a ride. We’ve been rolling down the hill, bumping into things, and rubbing off our edges. Today, we’re more invested emotionally and spiritually in what we’re trying to accomplish. That’s why this album is so important to us. There were extraordinary moments, but there have also been moments alone in a practice room where I just thought, ‘Wow, I can’t believe music has made me into who I’m trying to be’. If you work hard enough at an instrument, you’ll inevitably be able to close your eyes, start playing, and feel like you’re flying. In essence, that really is the story of THE PIANO GUYS.”

The collective of friends and collaborators turned the first page of the story in 2011. The musicians initially captivated listeners everywhere on YouTube before visiting dozens of countries on tour. They built a catalog comprised of seven studio offerings, two Christmas albums, and a live record. Along the way, they gathered nearly 4 billion global audio streams, accumulated 2 billion-plus YouTube views, and achieved six #1 debuts on the Billboard Top Classical Albums Chart. In between sold out shows on five continents, the boys earned gold certifications for their self-titled album THE PIANO GUYS and single “A Thousand Years.” Additionally, they would be featured in The New York Times, Fast Company, BuzzFeed, Mashable, People and on CBS Sunday Morning in addition to performing on The TODAY Show, Good Morning America, and The Tonight Show.

In the end, THE PIANO GUYS may be ten years older and wiser, but they cling to the same values and mission that brought them here ten years ago. “We hope 10 brings the spirit of joy and hope into the hearts of those who listen to it,” Steven leaves off. “We hope there is ten years’ worth of effort on our part injected to the point where it comes across authentically, and we hope, maybe, it does some good.”

2. Someone To You (BANNERS)

6. Lose You To Love Me (Selena Gomez)

7. Someone You Loved (Lewis Capaldi)

8. A Million Dreams (The Greatest Showman)

9. Rewrite the Stars (The Greatest Showman)

13. What Makes You Beautiful (One Direction)

CONNECT WITH THE PIANO GUYS: