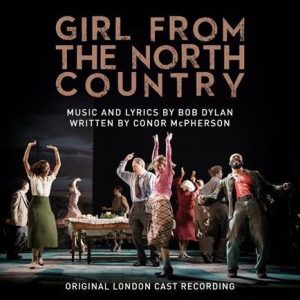 The Old Vic and Sony Music Entertainment today announces the release of the Official London Cast Recording of Girl from the North Country. Featuring lyrics and music by Bob Dylan, the album was recorded at the iconic Abbey Road Studios and will be available to buy, download, and stream on September 29, 2017. The album is available to pre-order now on Amazon.

Girl from the North Country opened at The Old Vic in July to 5-star reviews and runs until October 7, 2017.

The album is available to pre-order now on Amazon.

“This is not, just to set the record straight, Bob Dylan the Musical. You don’t need to know his songs to fall for this play by Conor McPherson, which includes 20 of them. But if you do know them well, as I do, then there are moments when you can just close your eyes and melt into the night”

“This is Dylan like we’ve never heard him before, 20 songs sculpted into plaintive but beautiful new arrangements by Simon Hale. Some numbers are familiar, others less so, but nearly all are delivered so hauntingly well by the 20-strong company that they send shivers down the spine as we hear the lyrics afresh”

“Henderson’s rendition of “Like a Rolling Stone” is laceratingly lovely, performed with vocal might and moral heft”

“The arrangements – by Simon Hale – are ravishing”

“The effect, as dialogue and song bleed in and out of each other in a fluid, dream-like piece of theatre, is sublime”

“Ballads of Bob make for a Dylan delight”

“The music really makes it. Dylan’s great songs will have you singing into the back of your hand…Dylan fans have no choice but to grab their tickets”

“You don’t need to be into Bob Dylan’s music to get bursts of pleasure from Connor McPherson’s new play. But if you do happen to be a Dylan fan, boy are you in for a treat”

Written and directed by Conor McPherson, Girl from the North Country is aptly set in Bob Dylan’s hometown of Duluth, Minnesota. It’s 1934 and a community who are living on a knife-edge soon huddle together in the local guesthouse. The owner, Nick, owes more money than he can ever repay, his wife Elizabeth is losing her mind and their daughter Marianne is carrying a child no-one will account for. And, when a preacher selling bibles and a boxer looking for a comeback show up in the middle of the night, things start to spiral beyond the point of no return.

Brought to life by a 20-piece company of actors and musicians, award-winning playwright Conor McPherson beautifully weaves the iconic songbook of Bob Dylan into this new show full of hope, heartbreak and soul.

“I’m so delighted the brilliant talent of our cast will be captured at Abbey Road Studios. It’s been an honour working with them on Bob Dylan’s incredible songs. The reaction from audiences every night and the clamour for a recording has been overwhelming and is a true testament to their stunning voices.”

Girl from the North Country features songs from every period of Bob Dylan’s catalogue with new musical arrangements by Simon Hale.