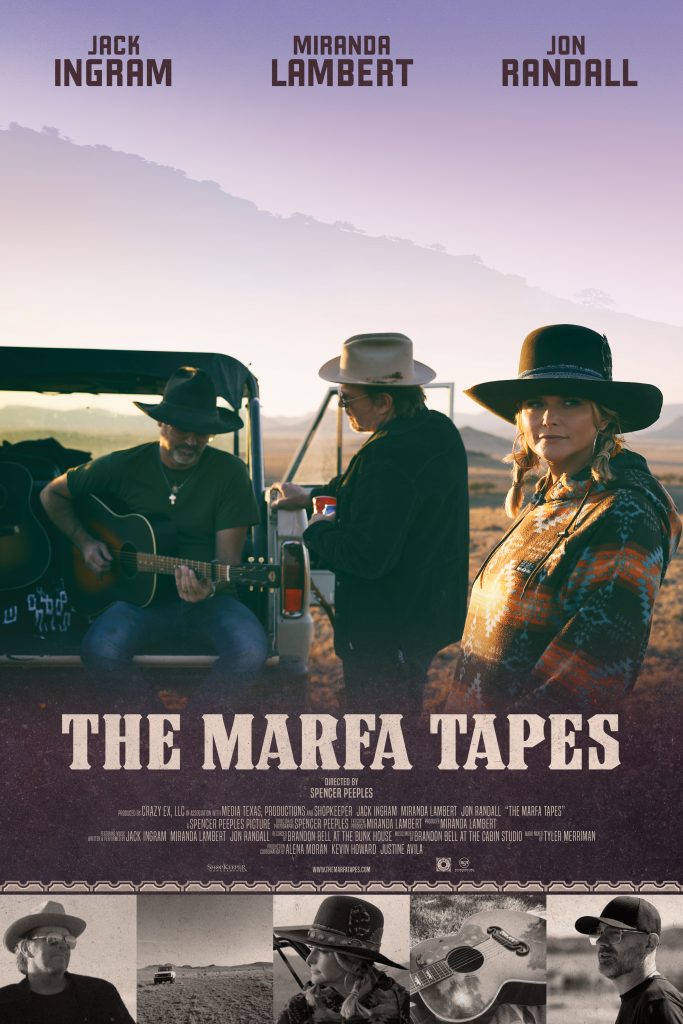 “The Marfa Tapes Film” is a captivating dive into the creative process behind the making of The Marfa Tapes, the “fascinating” (Nashville Lifestyles) new Top 10 album from Jack Ingram, Miranda Lambert, and Jon Randall. Directed by Spencer Peeples, it includes live performances set against the West Texas backdrop, candid interviews, and behind-the-scenes footage captured during the five-day album recording sessions in Marfa last November.

Meanwhile, “They’ve Closed Down the Honky Tonks,” a new track heard exclusively in the film, is also available now. Listen here. Following widespread shut downs across the country, Lambert wrote the track completely solo in the early days of the COVID-19 pandemic.

Recorded raw and loose with just a pair of microphones and an acoustic guitar, The Marfa Tapes has quickly become one of the year’s most celebrated projects, earning rave reviews from the Wall Street Journal, Pitchfork, TIME, Variety, Vulture, and many more. To welcome the release, Ingram, Lambert, and Randall performed the “wistful and romantic” (Billboard) album opener “In His Arms” on CBS’ “The Late Show with Stephen Colbert.” Watch here.

Critical Praise for The Marfa Tapes:

“Their comfort working together and shared Lone Star musical sensibilities—lean yet varied, and built on pointed observations—are well-exhibited in this winningly informal set,” —Wall Street Journal

“All those raw emotions, tense ruminations and giddy highs: slice them to the bone, without fluff, filigree, ornate instrumentation or over-production,” – Variety

“These songs dig into sentiments as old as the Texas soil, and convey them with clarity and heart…The Marfa Tapes is a high mark for all three careers,” – Vulture

“It’s an album both familiar and new in equal measure, and one of the most inspired projects Lambert has ever released,” – Entertainment Weekly

“a songwriter’s record if ever there was one,” – Rolling Stone

“Somewhere between a demo collection, a live album with no audience, and a lo-fi left turn, this music is a joy to hear, like a vacation on record…The Marfa Tapes puts the focus on the simple joys of songwriting and delivery, offering the group’s music as something wide open and alive,” – Pitchfork

“The songs on The Marfa Tapes are straight-up country songs, presented in their most elemental form…sung by committed professionals who know how to sell those feelings, those Marfa Tapes songs hit hard,” – Stereogum

“The songwriting is first-rate, and the minimalist aesthetic suits these tunes in a way that more elaborate arrangements and polished production never would,” – Paste

“you can really feel the warm Texas air in the recordings. You hear the breeze, the spaciousness, little sounds off in the distance, and the album is even better for all of those reasons,” – Brooklyn Vegan

“one of the best albums of the year,” – No Depression

“The Marfa Tapes is the rawest–and some might say most real–recording you’ll get from this trio, and it’s all the better for it…It’s unembellished sound and scruffy methodology is a quality we don’t have enough of in today’s often excessively tweaked and overly polished fare,” –  Holler.Country

“a wonderful collection for true lovers of country songs…Whether it’s the sadness saturating ‘Being Heart Broken,’ the emotional liberation described in ‘Ghost’ or the spunk of ‘Geraldene,’ there is plenty of quality and variety to be enjoyed,” – Country Standard Time

ABOUT SPENCER PEEPLES:
Texas native and Director Spencer Peeples has worked with some of country music’s greatest artists – from creating music videos for Jack Ingram, Jerry Jeff Walker, Bruce Robinson, Willis Alan Ramsey, Turnpike Troubadours and many others, to touring with George Strait in 2018 as a stage camera operator, and shooting album covers for award-winning musicians including GRAMMY winner Miranda Lambert. His fly-on-the-wall approach to filming allows him to capture content in its natural form which has become wildly popular and praised by musicians. Spencer has had a passion for film and photography since the age of ten and began his career by cutting his teeth at the Austin Music Network.