OFF OF HIS UPCOMING DEBUT ALBUM 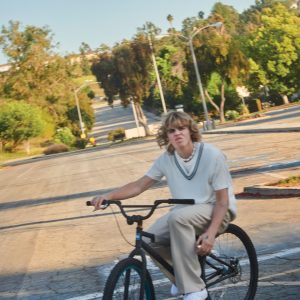 Listen HERE. It is accompanied by the blockbuster music video directed by Christian Breslauer. Watch it HERE.

For the track, LAROI taps powerhouse co-producers Andrew Watt and Louis Bell. In the visual co-starring Katarina Deme, LAROI does something he’s never done before and literally faces himself. “Thousand Miles” takes on new meaning as the accompanying visual proves to be provocative, poetic, and powerful as LAROI confronts his one true rival.

Upon announcement earlier this week, The Kid LAROI shook social media with a groundswell of excitement. Maintaining this momentum, LAROI launches his first ever headlining END OF THE WORLD TOUR next month in Australia, hitting arenas before landing stateside. Check out full tour dates below.

ABOUT THE KID LAROI:
The Kid LAROI crashed landed at the forefront of pop music and changed it with an inimitable vision of his own. Braving a tumultuous childhood beset with hardship, trials, and tribulations, he quietly emerged as a cultural force with a future-facing style, bordering pop, hip-hop, alternative, and rock without ever staying still for too long. Along the way, the 18-year-old superstar has earned dozens of gold, platinum, and multiplatinum certifications, toppled the Billboard Hot 100 with the 8X Canadian Platinum certified “Stay” (feat. Justin Bieber), resulting in a 2022 Juno nomination and captured #1 on the US Billboard Top 200 with his 3x Canadian Platinum certified F*ck Love project. He has tallied billions of streams on his rise, as he proves to reach new heights with his forthcoming 2022 album.