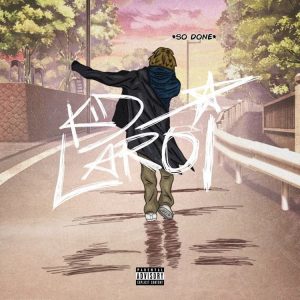 (October 23rd, 2020 – New York, NY) The Kid LAROI is “So Done” in his first song from forthcoming project. Teaming up with frequent collaborators Cole Bennett and Lyrical Lemonade, an exasperated LAROI vents his frustrations regarding love and romance in today’s new visual. Watch HERE. “So Done” is the first release off a new project that is coming soon amidst his new partnership with Spotify, becoming their third U.S. RADAR Artist this past Wednesday.

About The Kid LAROI:
At only seventeen years old, The Kid LAROI made waves with his first major label mixtape F*ck Love debuting in the Billboard 200 Top 10. Managed by Grade A, home of Juice Wrld and other notable artists – The Kid LAROI continues to show incredible promise as he leads the artists to watch conversation. After receiving many notable co-signs from his peers, LAROI is on his way to becoming a household name.

About Spotify RADAR:
In March, Spotify launched their global emerging-artist program, RADAR, to help artists across all stages of their career use the strength of the platform to deepen connections to their audiences. They recently doubled down on that commitment by launching the RADAR Global Hub, and continuing to expand RADAR in the U.S. through our newest partnership with teenage hip-hop artist The Kid LAROI.

“The Kid LAROI is an artist we’ve been watching closely for the last eighteen months,” says Ned Monahan, Spotify’s Head of Global Hits. “LAROI developed a rabid fan base in Australia and then translated it to an even bigger audience in the U.S., which is incredibly rare and speaks to his potential as a global hit maker. The vulnerability and boldness of his music places him at the heart of young music audiences across the world. We can’t wait to see LAROI break on a superstar level.”

As a RADAR artist, LAROI will be featured on the RADAR playlist, he’ll create a Spotify Singles recording, and he’ll receive promotional support for his upcoming releases. The Kid LAROI’s campaign will also include a forthcoming mini-documentary to premiere later this November. 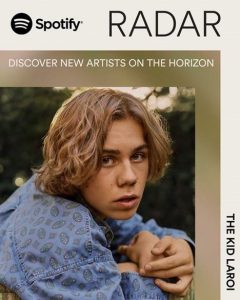