THE KID LAROI CLOSES F*CK LOVE WITH “STILL CHOSE YOU (FEAT. MUSTARD)”ACCOMPANIED BY A LETTER TO HIS FANS AS HE MOVES TO WORK ON HIS HIGHLY ANTICIPATED DEBUT ALBUMWATCH THE VIDEO DIRECTED BY ARRAD HERE 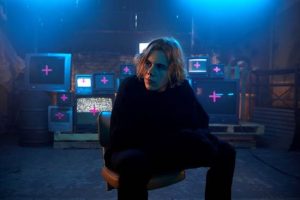 (November 15 2021) After three chapters that include his first No.1 and R.I.A.A certified platinum project, as well as two US Billboard top 10 hits “Stay” – which has spent 6 of its 17 weeks on the chart at No.1 – and “Without You“, The Kid LAROI is closing the F*CK LOVE chapter. Alongside today’s music video and fan favorite “Still Chose You” featuring/starring Mustard, Laroi pens a heartfelt letter to his fans on this journey and his next steps: 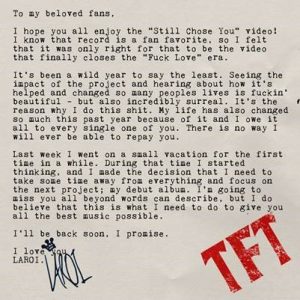 To my beloved fans,

I hope you all enjoy the “Still Chose You” video! I know that record is a fan favorite, so I felt that it was only right for that to be the video that finally closes the “F*ck Love” era.

It’s been a wild year to say the least. Seeing the impact of the project and hearing about how it’s helped and changed so many peoples lives is f*ckin’ beautiful – but also incredibly surreal. It’s the reason why I do this shit. My life has also changed so much this past year because of it and I owe it all to every single one of you. There is no way I will ever be able to repay you.

Last week I went on a small vacation for the first time in a while. During that time I started thinking, and I made the decision that I need to take some time away from everything and focus on the next project; my debut album.

I’m going to miss you all beyond words can describe, but I do believe that this is what I need to do to give you all the best music possible.

I’ll be back soon, I promise.
I love you
LAROI.