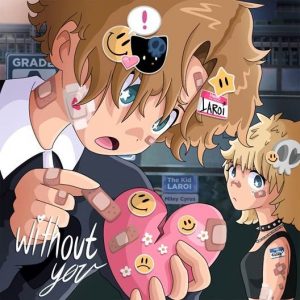 (April 30th, 2021) After making his late night TV debut on The Tonight Show Starring Jimmy Fallon as well as his daytime debut on The Ellen DeGeneres Show performing his 2 x Canadian certified platinum + smash hit “Without You,” The Kid LAROI has tapped the multi-platinum selling recording artist, songwriter and trailblazer Miley Cyrus.

With F*CK LOVE (SAVAGE) debuting No. 3 on the US Billboard charts, peaking at No. 1 on the Australian ARIA Album Chart all whilst “Without You” maintains its number 2 position in Canadian top 40 radio ahead of the new duet, the song comes together organically after an impromptu studio session with the two friends and musicians as they gear up to perform the track on Saturday Night Live on May 8th.

About The Kid LAROI:
At only seventeen years old, The Kid LAROI made waves with his first major label mixtape F*CK LOVE. Managed by Grade A, home of Juice WRLD and other notable artists – The Kid LAROI continues to show incredible promise and vocal ability as he leads the artists to watch conversation with his critically acclaimed repack of F*CK LOVE (SAVAGE). After receiving many notable nods and co-signs from his peers, LAROI is well on his way to becoming a household name.

About Miley Cyrus
Miley Cyrus continues to have a stronghold on pop culture in 2021. Cyrus, who recently celebrated the 15th anniversary of her groundbreaking smash television show Hannah Montana, partnered with Cash App to give away $1million in stocks to fans, making Miley the first person in history to distribute such a large volume of sticks en masse in a nearly instantaneously fashion. Cyrus also performed at the Tribute to Frontline Heroes during 2021 NCAA Men’s Final Four on Saturday, April 3, in Indianapolis; previously, Miley performed at the first COVID-19 compliant live music show of its size in the US since the start of the pandemic nearly a year ago to an audience composed of fully vaccinated healthcare workers. Her latest album, Plastic Hearts, debuted at #1 on US Billboard’s Top Rock Albums chart. Plastic Hearts is her first number 1 on this chart and 6th number 1 album. The album also debuted at number 2 on the US Billboard 200, giving Miley the most top 10 album debuts on the chart for female artists this century.