Listen to “Come Over” NOW 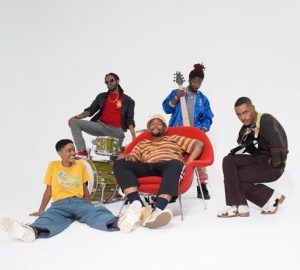 (May 31st, 2018; Columbia Records) – Following the release of their incredible song, “Roll (Burbank Funk),” THE INTERNET are pleased to announce the details of their forthcoming fourth album, HIVE MIND, due out July 20th, 2018 on Columbia Records.  In addition to “Roll (Burbank Funk),” a brand new song from the record – entitled “Come Over” – can be heard now following its debut as Zane Lowe’s World Record on Beats 1 on Apple Music today; click HERE to listen to it.

HIVE MIND — written and produced entirely by THE INTERNET — is the band’s follow up to their breakthrough third album, Ego Death.  That album’s fresh sound — funk-tinged beats, laced with slinky guitars, evocative keys, and heart-striking lyrics about relationships with women — earned it a GRAMMY nomination for Best Urban Contemporary album, countless sold out shows, and massive acclaim on an international scale, quickly catapulting THE INTERNET to one of the most exciting new artists of this decade.  With the dynamic, multi-dimensional offering, THE INTERNET let the world know that they were not only insanely talented, but a true, five-person force whose singular talents created one phenomenal whole.

After a lengthy world tour in support of that record, the band encouraged each other to explore their identities as solo artists; incredible solo albums from all five members of THE INTERNET emerged to rapturous response throughout 2017.  Feeling the unity of coming back together, however, created the foundation for what became HIVE MIND.  In their new music, members Syd (vocalist/songwriter), Matt Martians (producer), Steve Lacy (guitarist/vocalist/songwriter), Patrick Paige II (songwriter/bassist), and Christopher Smith (songwriter/drummer) present kaleidoscopic, neo-soul, future sounds that reveal the growth in their creative chemistry.  It’s light years beyond their previous output, and even in its slower moments, the project is both intricate and minimal, giving each member’s contributions the space to shine.

This sense of togetherness – not just for them, but for everyone – is one that the band chose to highlight as a major theme for the album.  “After making a few songs we realized that we really want to use this album to live by example and promote camaraderie amongst young black people,” Syd reveals. “We realized that we’re the only band of our kind. And we want to really solidify ourselves as that, as the best.”

With the chaos of the current world considered as well, all of THE INTERNET wanted to champion good feelings and the joy of following your heart and passions, in addition to using their own positive relationships and experiences to inspire their community. In collectively working through the process, the crew unearthed an even deeper purpose as they collaborated on this record.  The result is not just one of the greatest records in the band’s already phenomenal catalogue, but is easily one of the best albums of 2018, from five amazing people already leaving an indelible mark on pop music.

THE INTERNET will be touring extensively throughout the rest of 2018.  See dates below.