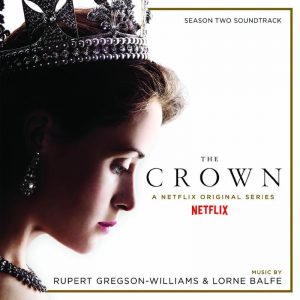 The soundtrack to the new season of the Netflix original series released on December 8th. Following the success of the first season, which was named Best Drama at the 2017 Golden Globes among the many honors it received,season two of The Crown will premiere globally on Friday, December 8, 2017, featuring 10 brand-new episodes.

ABOUT THE CROWN:
The award-winning series The Crown returns for a second season to continue the telling of the inside story of Queen Elizabeth II’s reign, as the fragile social order established after the Second World War breaks apart. Based on the award-winning play, The Audience, the series reunites creator/writer Peter Morgan (The Queen, Frost/Nixon) with director Stephen Daldry (Billy Elliot, The Hours) and producer Andy Harries (The Queen).

Beginning with soldiers in Her Majesty’s Armed Forces fighting an illegal war in Egypt, and ending with the downfall of her third Prime Minister, Harold Macmillan after a devastating scandal, the second season bears witness to the end of the age of deference, and ushers in the revolutionary era of the 1960s.

The Crown continues to chronicle the major political and global events that have defined and shaped the second half of the twentieth century – a series that is unprecedented in its scale, ambition and creative vision.

Rupert Gregson-Williams was born in England and educated at St. John’s College Choir School, Cambridge. The multi-award winning composer works from his studios in both London and Los Angeles.

A truly versatile composer, Gregson-Williams has written a wide range of scores for many feature films, including the Oscar-winning Hotel Rwanda for which he was awarded the European Film Award for Best Composer, the blockbuster DreamWorks animated films Over The Hedge and Jerry Seinfeld’s Bee Movie, for which Rupert was nominated for an Annie Award for his original score and the independent BBC Films’ Love + Hate, for which he was awarded the Reims International Composer Award.

Gregson-Williams received an Emmy nomination this year for Outstanding Music Composition for a Series (Original Dramatic Score) for his work on the first season of The Crown. He has also composed the music for various other TV projects, including the Emmy-award winning HBO series Veep, AMC’s The Prisoner, and Sky Vision’s Agatha Raisin.  He received an Emmy nomination for the 2002 telefilm Jack and the Beanstalk: The Real Story, for Outstanding Music Composition for a Miniseries, Movie or a Special (Dramatic Underscore).

Gregson-Williams has had a long association with Adam Sandler and has composed the scores for many of his films over the past ten years.  Their collaborations include Click, Bedtime Stories, Grown Ups, Just Go with It, Here Comes the Boom, The Ridiculous 6, The Do-Over, and the recently released Sandy Wexler, starring Sandler and Kevin James and directed by Steven Brill. His other film credits include Winter’s Tale, directed by Akiva Goldsman; Zookeeper, starring Kevin James; Made of Honor, starring Patrick Dempsey; and Thunderpants, starring Stephen Fry. His commercial and film collaborations have included working with Ben Folds, Mark Knopfler, Hans Zimmer, Hadag Nahash, Lebo M., Junior Mambazo and Moya Brennan.

Balfe’s big break came when he scored his first major feature film, Megamind, which he co-composed with Hans Zimmer.

Lorne Balfe continues to receive critical acclaim and accolades for his work in all visual media including the animated features Home and Penguins Of Madagascar, based on the beloved British TV series, The Sweeney, the historical epic Ironclad, the Gloria Trevi-biopic Gloria, acclaimed documentaries Manny (about the life of Manny Pacquiao), Salinger (about J. D. Salinger) and The Last Man On The Moon (about Apollo astronaut Gene Cernan). His television work includes the epic mini-series The Bible (co-composed with Hans Zimmer) and Sons Of Liberty. In 2012, Lorne Balfe earned his first EMMY nomination for the mini-series Restless.

The track list of THE CROWN: SEASON TWO (Soundtrack from the Netflix Original Series) is as follows: