The Chainsmokers’ “Something Just Like This” Remix Package Out Now!

MEMORIES POP UP STORES TO OPEN IN SAN FRANCISCO, TORONTO AND NEW YORK 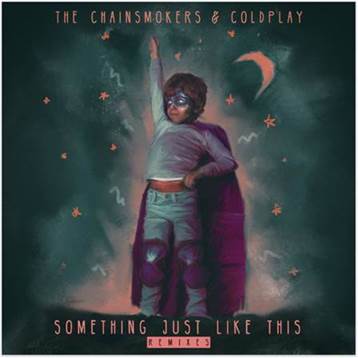 Grammy Award-winning artist/producer duo The Chainsmokers’ new remix package for their single “Something Just Like This” with Coldplay is officially available now HERE. The package features innovative versions of the song from Grammy nominated producer Alesso, R3hab, Dimitri Vegas & Like Mike, Don Diablo, Jai Wolf and ARMNHMR. Full track list is below.

The original track “Something Just Like This” has peaked within the Top 3 on the Canadian Top 40 chart, after “Paris,” which peaked within the Top 10. Both songs are featured on The Chainsmokers’ debut album Memories…Do Not Open which debuted at No. 1 on the Nielsen Canada SoundScan Top Albums chart upon release. The album became the first to simultaneously lead both the Billboard 200 and the Top Dance/Electronic Albums chart in nearly three-and-a-half years.

The Chainsmokers are set to launch their very own Memories Pop Up stores in San Francisco, Toronto and New York. The San Francisco store will open on Friday, May 5 and run through Sunday, May 7 from 11 a.m. to 8 p.m. each day. The store will be located at 55 Wentworth Place and will feature brand new merchandise items available for sale. Alex and Drew will also pay special visits to the store. Fans can visit the Toronto store on Tuesday, May 30 and the New York store from Thursday, June 8 through Sunday, June 11 with exact locations to be announced soon. 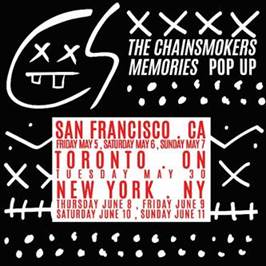 The Chainsmokers are currently on the road for their 40-city Memories…Do Not Open North American arena tour. The tour will stop in major cities across the U.S. and Canada before concluding in June and features brand new production elements with part DJ set and part live band performances. Every ticket purchased online for the tour includes a copy of Memories…Do Not Open. For tour and ticket information visit http://www.thechainsmokers.com/shows.

Buy/Stream “Something Just Like This” with Coldplay Remix Package:
http://smarturl.it/MDNORemixListen