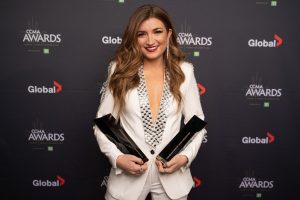 In addition to Female Artist, Townes also won Ford F-150 Album of the Year for her celebrated debut release The Lemonade Stand, which features her Gold-certified debut single “Somebody’s Daughter” and follow-up “Jersey on the Wall (I’m Just Asking),” which both topped Canadian country airplay charts. The album was met with widespread critical praise, with Rolling Stone observing “it’s ultimately hopeful, empathetic, and supremely welcome at a moment when it’s easy to start feeling like everything looks pretty bleak” and Paste declaring “The Lemonade Stand is a good country album just about any way you spin it…Tenille Townes has the talent and energy that turns country singers into country stars.” The LP was also named Country Album of the Year at the 2021 Juno Awards.

Townes will embark on her headlining GIRL WHO DIDN’T CARE TOUR throughout her native Canada Thursday (12/2) in London, Ontario with stops in Toronto, Ottawa, Calgary, and more. She’s also set for her first ever U.S. headlining tour with the VILLAIN IN ME TOUR getting underway Jan. 19 in Cambridge, MA. Her new holiday EP, Songs for Christmas, is also available now and features two original tracks, as well as Townes’ take on “The Christmas Song” and Willie Nelson’s “Pretty Paper.” Listen here.

About Tenille Townes: Canadian-born and Nashville-based, Tenille Townes is a two-time ACM Award-winning singer, songwriter and musician in the midst of a breakthrough following the release of her acclaimed debut album, The Lemonade Stand . Available now via Columbia Nashville in partnership with RCA Records, the album was produced by Jay Joyce (Eric Church, Miranda Lambert, Little Big Town) and consists of twelve songs all written by Townes. Since its release, Townes has been named New Female Artist of the Year at the 55th ACM Awards, won two awards at the 2021 Canadian Country Music Association Awards, making her a 10-time CCMA winner, and received her first JUNO Award for COUNTRY ALBUM OF THE YEAR at the 50th Annual JUNO Awards. She is also the first female in Mediabase Canada history to achieve two No. 1 singles with album tracks “Jersey On The Wall (I’m Just Asking)” and “Somebody’s Daughter.” Following standout support runs with Dierks Bentley, Miranda Lambert, and Brothers Osborne, Townes will embark on her first headlining U.S. Tour, the VILLAIN IN ME TOUR, in January 2022. Adding to an already notable career, Townes is a MusicRow 2020 Next Big Thing Artist, an iHeartCountry’s “On The Verge” artist and has raised over $2 million for charity through her annual Big Hearts For Big Kids fundraiser.