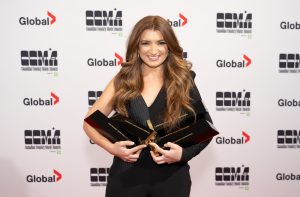 Calgary, AB.—Songwriter, performer and two-time ACM winner Tenille Townes won big at the 2022 Canadian Country Music Association Awards taking home five trophies. Townes, who co-hosted the awards alongside Blanco Brown, picked up awards for Entertainer of the Year, Female Artist of the Year and Ford F-150 Album of the Year for her project released earlier this year, Masquerades. She additionally won Single of the Year for “Girl Who Didn’t Care” and Songwriter of the Year for the same track, alongside Steph Jones & David Pramik.

Tenille also made the debut tv performance for her newest song “The Last Time,” released earlier this month. The song talks about the universal feeling of nostalgia you get after the realization of an occurrence in your life happened for the last time.

Earlier this year, Tenille dropped her highly anticipated project Masquerades via Columbia Nashville/Sony Music Nashville in partnership with RCA Records. The album, which won the Ford F-150 Album of the Year Award at the CCMA Awards, is the first soul-baring collection from Tenille, where she fully pulls her own mask down. “Masquerades really represents those things that we get used to hiding behind and the idea of being able to step out and still hold on to the hope with both hands in the middle of that process.” And at the heart of the EP is humanity. Masquerades features tracks with BRELAND, known for fusing Gospel, R&B and Country, on “Shared Walls,” as well as with hit singer-songwriter Wrabel, who duets with Tenille on her single “When You Need It.”