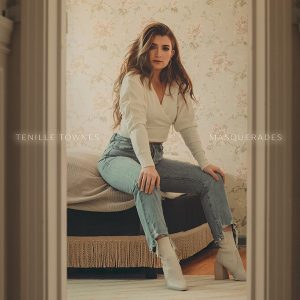 “…one of country music’s most intriguing female artists at the moment.” – People

“In Townes’ latest release, she again proves her mettle as a writer and vocalist.” – Billboard

Critically acclaimed singer-songwriter Tenille Townes reveals the tracklisting for her upcoming EP, Masquerades, set to be released on April 22 via Columbia Nashville/Sony Music Nashville in partnership with RCA Records. The EP will feature tracks with hit singer-songwriter Wrabel, who duets with Tenille on “When You Need It,” as well as BRELAND, known for fusing Gospel, R&B and Country, on “Shared Walls.” The soul-baring collection sees Tenille pull her own mask down and shine a light on those emotions that we get used to hiding. Click here to watch the EP’s trailer.

Alongside an ever-growing touring schedule, this past weekend, Tenille hosted her 12th annual Big Hearts for Big Kids event in Alberta, CAN, raising over $450,000. At just 15, she started the concert fundraiser in her hometown to benefit her local youth shelter, The Sunrise House, raising over $2 million thus far. 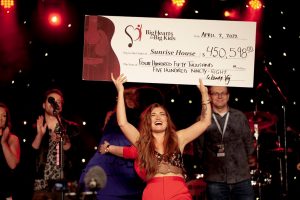 This year’s event kicked off “Big Hearts On The Road,” a mini-tour set to hit Nashville on May 3rd at Exit/In on behalf of Room In The Inn, Dallas on May 12th on behalf of Midlothian Manna House, and Charlotte on May 14th on behalf of S.A.F.E. Animal Haven Rescue. Tenille took her event on the road to inspire people in their own hometowns to make a difference, where she’s partnering with fans at every stop to raise money for a cause close to their hearts. She brings her guitar and a heart for helping others and the fan brings their cause and a desire to make an impact in their community. Click here for more info and to purchase tickets.

Most recently, Tenille released the song “When’s It Gonna Happen” which will be featured on her forthcoming EP, as a response to an outpouring of fan support on social media to the track. With lyrics like “Sometimes I feel like I’m the last one standing / I look around and all my friends are falling in love,” it’s little wonder fans connected with the hope, insecurity, fear, and anticipation Townes brings to life through the driving track. “When’s It Gonna Happen” is currently top 15 and climbing at Canadian country radio. Last month, Tenille performed the track on the Academy of Country Music Awards red carpet. Watch here.

MASQUERADES TRACK LISTING:
1. When You Need It (featuring Wrabel)
2. When’s It Gonna Happen
3. The Sound of Being Alone
4. Villain In Me
5. Shared Walls (featuring BRELAND)
6. Same Road Home
7. Light In Your Eyes