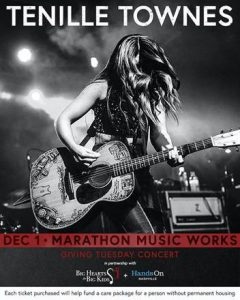 October 28, 2020—Breakthrough singer, songwriter and musician Tenille Townes will perform a special Giving Tuesday Concert at Nashville’s Marathon Music Works on December 1 in partnership with Big Hearts For Big Kids and Hands On Nashville. The full-band show will provide an opportunity for fans to give back, with proceeds from each ticket helping to fund care packages for those without permanent housing. Tickets for the reserved seated show are now on-sale here.

The event is just the latest charitable initiative from Townes this year. Over the summer, she raised $89,000 during her virtual “Big Hearts For Big Kids” fundraiser with all proceeds benefitting two organizations: Sunrise House (a local youth shelter in Townes’ hometown of Grande Prairie, Alberta) and Girl Scouts of Middle Tennessee’s Troop 6000 (an initiative that supports girls without permanent housing in the Nashville area). In the eleven years since Townes started the annual fundraiser, “Big Hearts For Big Kids” has raised over $2 million.

Continuing her breakout year, a new lyric video for Townes’ song, “Jersey On The Wall (I’m Just Asking),” is debuting today. Watch/share HERE. Since releasing the song, Townes has received thousands of messages from fans sharing their own “Jersey” stories. The new video features a collection of jerseys, each of which was specially made with the names and numbers of athletes who were lost too soon and whose stories were shared with Townes by their family members, teammates and friends.

Reflecting on the video, Townes shares, “Hearing from people about what this song means to them has been the most incredible thing to me. It gives me a heavy heart to hear the names, jersey numbers and stories of so many loved ones out there taken too soon. It also gives me hope to hear them, and know that they live on through those stories, and that we are truly not alone in our deepest grief and in the questions we have.”

Critical acclaim for The Lemonade Stand:

“Although the rising country music artist is only 26 years old, the depth of emotion she reveals in her songwriting would suggest someone who has lived a much longer
life.”—Women’s Wear Daily

Lyrically, Tenille Townes’ American debut The Lemonade Stand may be the best of 2020…the humble master of turning a social statement into a poetic, concise and melodic
country song”—Taste of Country 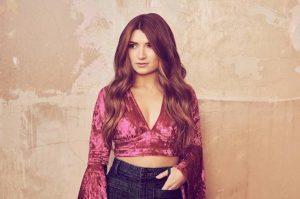