“I Wanted My Heart to Break” 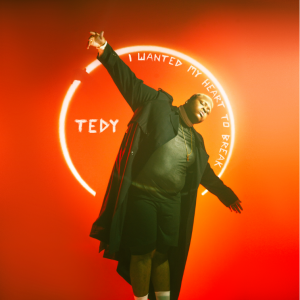 (22 April 2022) Toronto, Canada – Today, Haitian-Canadian singer-songwriter Tedy releases his newest track “I Wanted My Heart to Break.” After moving to Toronto in 2020, Tedy threw himself into writing, rehearsing, and collaborating in the studio. The result, “I Wanted My Heart to Break,” is an empowering and courageous pop anthem elevated by Tedy’s signature soaring vocals.

“I started writing this song when I was in a dark place, and this song started to give me life and the courage to keep moving on,” said Tedy. “When people hear this song, I want them to feel empowered, free, and ready to go for whatever they want regardless of the outcome.”

“‘I Wanted My Heart to Break’ means so much to me,” said Tedy.  “I was always so afraid of writing ballads, and this song helped me get over my fear, put myself out there, and just express myself completely.”

This new track starts a busy spring and summer for Tedy, as the artist gears up for the release of his hotly anticipated EP Manic Party later this year.