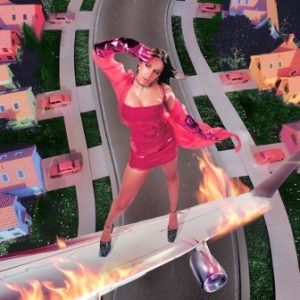 The album showcases Tate at the top of her game, featuring all-star writing collaborators and producers including Greg Kurstin, Finneas, Charlie Puth, Alexander 23, Blake Slatkin, Louis Bell and more.  With already released tracks “feel like shit,” “she’s all i wanna be,” “chaotic,” “what would you do?” and more showcased on the album, Tate is an unstoppable force.  “she’s all i wanna be” alone has over 230 million worldwide streams.

Last week, Tate teamed up with Sony Electronics for an album launch event in conjunction with the arrival of their new LinkBuds S headphones. The event kicked off with Tate performing on a private jet followed by a livestream concert via Amazon Music with Z100 and Instagram joining the festivities.  Just yesterday, Tate was revealed as the most recent digital cover for UPROXX Magazine.

Tate just wrapped her 2022 North American Tour and is currently headlining dates in the EU with dates in the UK and Australia later this summer. Starting in September, Tate will tour as the special guest on Shawn Mendes’ Wonder: The World Tour 2022. For more information, please visit www.tatemcrae.com/tour.

i used to think i could fly Track List

Calgary native singer/songwriter/dancer Tate McRae has become the artist to watch with over 4 billion career streams, over 765 million video views, a #1 Top 40 hit and multiple #1 dance hits. She was listed on Forbes 30 Under 30 List for 2021 as the youngest musician on the list as well as Apple’s Up Next Artist for 2021, Amazon’s Artist to Watch in 2021, Pandora’s Artists To Watch 2021 list and included on Billboard’s 21 Under 21 and People Magazine’s One’s To Watch list. She was also named one of YouTube’s Artists on the Rise, and MTV’s Push Artist for July 2020.  Most recently she was nominated for a People’s Choice Awards for The New Artist of 2021, three 2022 iHeart Radio Music Awards, a 2022 Billboard Music Award, and a JUNO award.

Tate’s #1 multiplatinum-selling single, “you broke me first” has over 1.4 billion streams worldwide.  Tate has collaborated with Khalid on their track “working,” DJ Regard & Troye Sivan on their #1 Dance hit “You,” blackbear on “u love u” and Jeremy Zucker on her single “that way.” She capped off 2021 with the release of “feel like shit” which currently has nearly 90 million streams worldwide.  She’s released two EP’s—ALL THE THINGS I NEVER SAID and TOO YOUNG TO BE SAD and spent 2022 touring festivals including Lollapalooza, Firefly Music Festival, Governor’s Ball, Austin City Limits, iHeart Radio’s Jingle Ball tour, and more.

Tate was announced as Maybelline’s newest brand ambassador and is the face of their new Vinyl Ink liquid lip color.