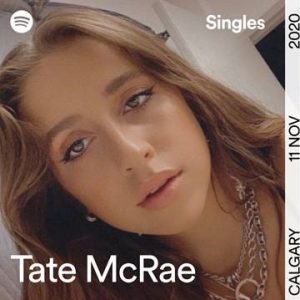 (November 11, 2020 – New York, New York) – Rising star Tate McRae joins the Spotify Singles program and releases two brand new recordings for the platform. Recorded at home in Calgary, Side A is a reimagined version of Tate’s viral single “you broke me first,” which she released earlier this year via RCA Records. Side B is a cover of Conan Gray’s “Heather.” Listen to both here.

Regarding her Spotify Singles cover song choice, Tate says: “’Heather’ is a really beautiful and emotional song by Conan Gray. I became obsessed with the lyrics and story he had created, I had to do a cover of it.”

Tate’s current single, “you broke me first” is certified Platinum in Canada, currently has over 425 million streams, is rising up the Top 40 radio chart (currently in the Top 20) and helped Tate to secure her spot in the Top 10 on Billboard’s Emerging Artist Chart and on the Hot 100 Chart. Globally, the track is in the Top 15 on Spotify’s Global 200 chart, is Top 25 in over 30 markets on the Spotify Charts and remains on the platform’s #1 playlist Today’s Top Hits.  The track continues to move up the singles charts at #4 in the UK (peaked at #3) and is Top 25 in Australia #9, Austria #15, Belgium #6, Canada #15, Switzerland #14, Ireland #4, Norway #5, Netherlands #12, New Zealand #17 and Sweden #8. The track is platinum in Australia, Canada, Ireland, Singapore and Sweden and gold in the US, Indonesia & Malaysia.

Mixing her vocal ability with her unparalleled dance moves, Tate performed the single on the MTV’s European Music Awards this past Sunday (watch here).  Billboard called the performance, “one of the most lasting impressions of the ceremony,” while NME, claimed it was “a stunning and stylish performance.”  She also performed the track on Jimmy Kimmel Live! in October (watch here).

Driving more than three billion streams since the program began in 2017, Spotify Singles was created to give artists an opportunity to record new versions of their own songs, and the songs of the artists they love. The Singles scope includes a unique version of each artist’s own song (Side A) and a cover song of their choosing (Side B). To date, there have been over 300 Singles recorded as part of the program.

In just over a year, singer/songwriter/dancer Tate McRae has become the artist on the rise.  She currently has over 2.8 million subscribers and over 325 million video views on YouTube and has nearly 800 million combined on demand streams to date.  She’s been named one of YouTube’s Artist on the Rise, MTV’s Push Artist for July, received a nomination for a 2020 MTV Video Music Award and has performed on the pre-show at this year’s awards, Jimmy Kimmel Live! And The 2020 MTV EMA’s.

She released her debut EP all the things i never said, in January which features her standout tracks, Platinum certified “stupid” “tear myself apart,” “all my friends are fake,” and “that way” as well as additional tracks “vicious” ft. Lil Mosey, “don’t be sad” and “lie to me” ft. Ali Gatie.  She has received a praise from a number of publications including Fader, Variety, Idolator, Wonderland, NME, iD, Seventeen, E! Young Hollywood, just graced the cover of UK’s Dork Magazine and so much more.

Tate McRae hails from Calgary, Canada after living in Oman until she was 6 years old.  She made a name for herself as a competitive dancer placing second runner up on Season 13 of the FOX series So You Think You Can Dance, achieved the“The Best Dancer”  honor three times at the prestigious Dance Awards, and hit the stage for performances on Ellen, The Teen Choice Awards, and beyond. Not to mention, she lent her voice to NETFLIX’s animated Lalaloopsy in the role of Spot Splatter Splash. Tate launched her YouTube channel and her “Create with Tate” music series where she has been consistently releasing original music (check out some here).