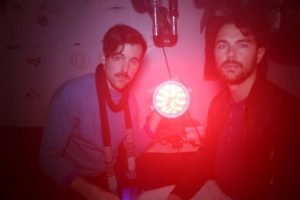 The imaginative video was directed by the award-winning American illustrator, photographer and director Matt Mahurin who is best-known for his iconic music videos for U2, Metallica, R.E.M, Tom Waits, Sturgill Simpson among many others. Watch the video exclusively on CLASH music HERE.

Of working with Tall Heights, director Matt Mahurin says: “I’ve been directing videos for 30 years and there are those wonderful times when you get to work with pure musicians. Tall Heights are all about the music-and despite Tim and Paul’s talent to create such beautiful songs, they possess an underlying tenacity to stay true to their creative mission. Unlike those musicians who can often be aloof or just plain uninterested when it comes to making music videos, Tim and Paul were invaluable collaborators in the process.”

On tour throughout the summer, Tall Heights just announced their first-ever performance at the Glastonbury Festival in the U.K. They will perform on June 25th, 2017 on the Croissant Neuf Stage. Their other festival stops include Best Kept Secret in Amsterdam, the Hurricane Festival in Germany among others. In July they will also perform at the prestigious Newport Folk Festival in Rhode Island for the first time.

Tall Heights, featuring Paul Wright and Tim Harrington, and their new album Neptune has received critical acclaim. It was named Paste Magazine’s “The Best of What’s Next”, one of SPIN’s “Five New Artists You Should Hear”, in addition to getting rave reviews from NPR, The Wall Street Journal, FUSE, Stereogum, Interview Magazine among others.